On Sunday, 8 December 2019 the ICH-NGO Forum organized the symposium Intangible Cultural Heritage in Urban Contexts. The presentations were published in a soft publication pdf, that is available on this website.

ICH in Urban Contexts is a timely topic. Over half of the population of the world is now living in urban areas – cities with millions of inhabitants and diverse communities. Cities such as Bangkok, Singapore, Bogota and Rotterdam are facing multiple social and cultural challenges, not the least, due to processes of migration, the challenge of superdiversity and social cohesion. 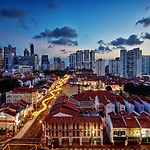