On Fair Monday everyone celebrates in Nieuw-Vossemeer. Early in the morning the inhabitants of this village in Brabant assemble in one of the two cafés for the Fair Breakfast. Then the prize-dancing starts: a dance competition for couples, with five cones on the floor or hanging from the ceiling, in a random setup. Three or four couples dance at the same time, but every couple must perform another dance. Usually these are the foxtrot, the jive and a waltz. While dancing they may not touch each other or the cones. The two bars each have their own jury of three. One of the jury members watches the dance itself, one counts the number of cones that are knocked down or touched while dancing and the third looks if the couples stay within the outlines of the dance floor. When the match in the first café is over, the couples and all the spectators move to the next café. Quite a lot of alcohol may be consumed, making it harder and harder to avoid knocking down cones and touching other couples. By the end of the day the results are revealed and the prizes awarded to the winning couples. Often various kinds of sausages can be won. The sausage is cut immediately and distributed amongst those present.

The two owners of both cafés in Nieuw-Vossemeer, the Voorwaarts café and café-restaurant ‘t Wagenhuis, organise the prize-dancing because the match is held in their establishment. Most participants and spectators live in Nieuw-Vossemeer or are former residents. The Projectgroep Prijsdansen (Project Group Prize-Dancing) is a partnership between the two cafés, the village council and the local history society Ambachtsheerlijkheid Nieuw-Vossemeer.

As of 1811 it was the custom in Nieuw-Vossemeer to have a two-day fair, every year in September. Heavy drinking, quarrels and fights were commonplace. During the forties of the nineteenth century it was inevitable that the constable and the military police were ready for action to keep the order or restore it if needed. The priest and the burgomaster of Nieuw-Vossemeer had severe objections and in 1854 the local council abolished the yearly fair. Still the fair kept alive in the memory of the inhabitants. In 1911 the fair was reintroduced. The café-owners now started to organise the prize-dancing competition on Fair Monday in order to prevent heavy drinking. Over time the social aspects of the competition became ever more important; dancing pleasure prevailed. People danced on organ music around beer bottles on the floor and hanging from the ceiling. The music has changed considerably over time: music bands appeared and nowadays couples dance to computerised music as well.  The dances themselves were also modernised. The number of cafés in Nieuw-Vossemeer has decreased drastically in the course of the twentieth century. Now there are only two establishments for prize-dancing left. 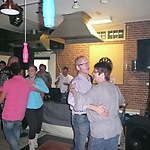 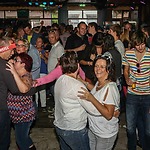 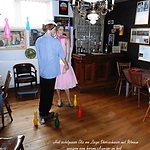 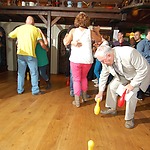 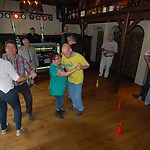