Epiphany is a lights feast that is still mainly celebrated in Mid-Brabant. Every year, on January 6, small groups of children go from door to door to sing Epiphany songs. In exchange they hope to get some sweets or money. The children are dressed up as the three kings from the East: Caspar, Melchior and Balthasar. In various neighbourhood, community and care centres, groups can sing for a jury. Egg cakes are distributed as well. Some of them contain a bean. Whoever gets the bean, earns an extra prize. The children sing special three kings songs. The most popular songs that are still sung, are old songs with a makeover. One of those is: ‘Three Kings, Three Kings, give me a new hat. The old one is worn, my mother is not to know. My father has put the money on the counter.’ Nowadays the children more often collect money for a good cause. At primary schools in Tilburg and surroundings attention is given to Epiphany singing with the help of a teaching pack.

Since 2008 four parties engage in the continued existence of the tradition: the Stichting de Tilburgse Taol (Tilburg Language Foundation), the local history groups of Tilburg and Goirle and the Foundation for the Preservation of Tilburg Cultural Heritage. These organisations are represented in the project group coordinating the Epiphany singing. The Federation of Tilburg Choral Societies is also closely involved. The pupils of primary schools in Tilburg and surroundings go from door to door, accompanied by parents and grandparents.

Epiphany has to do with an occasion that is mentioned in the Bible: three wise men followed a star to find the child Jesus. Later on there was a mention of three kings. The celebration concludes the Christmas period. The story goes that Emperor Barbarossa bestowed relics of the Holy Three Kings to the Archbishop of Cologne in 1164. At once pilgrims came to Cologne and the worshipping of the three kings spread, also to what now is called Limburg and Noord-Brabant. In the Middle Ages the poor went from door to door to get food or fuel. Churches and monasteries then distributed cakes. In the seventeenth century it was children who represented the kings. Singing Epiphany songs as done nowadays, dates from the nineteenth century. To accompany the singing, homemade instruments were used that made a lot of noise, like the rommelpot or foekepot (friction drum). Around the middle of the nineteenth century Epiphany singing had become a real children’s feast. In the twenties and thirties of the last century the feast came under pressure in many places. The fact that it could survive in Tilburg and the region is partly owed to an action concerning the wedding of Princess Juliana and Prince Bernhard (on January 7, 1937). The day before, Epiphany singing before a jury had been organised, which was a great success and would be repeated yearly ever since. The usual Epiphany singing by children in the streets is still happening, but the numbers decrease because of secularisation and lack of knowledge. Many parents find it dangerous that their children go from door to door in the dark. 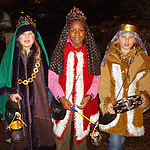 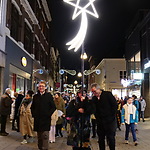 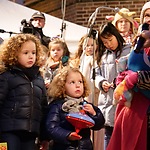 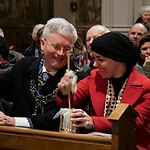