In 1970 the IOR measurement rules were introduced in competitive sailing. Together with the emergence of polyester as a building material, which enabled a greater degree of standardization among sailing yachts, a change in shape was created and the shape has been increasingly standardized. Still, there is a longing for the ships of yesteryear. They are lovingly maintained, restored from time to time, but also newly built: ships designed "in the spirit of" and replicas. As soon as sailing is possible, competitions are also held with it.

Classic racing competitions are broadly distinguished from modern competition sailing in the degree of standardization, further enhanced by the age and traces that left behind. Classic sharp yachts are therefore almost all unique. Sailing with old boats is therefore more about the "game" than about "the marbles". Due to the diversity outlined above, no matter how well rating methods are improved, there will always be a degree of "unfairness". Where one chooses authenticity, the other will adapt parts of his or her yacht with modern and better material. Unfair game? Who can tell. A competition with classics is not only a battle between themselves, but also against the ravages of time and the modern spirit. A battle that cannot always be won!

The people involved in competitive sailing with classic sharp yachts are difficult to describe. Some examples from practice today: The dentist who puts his money and free time in a sailing oldtimer and paints it with shiny copper from Muiden across the IJsselmeer. A poor student who buys yet another boat for little money to do some work on the weekends and to go out with a bunch of friends. A foundation which takes care of the yacht that has served as an example for the Captain Rob strip, and where young people now discover camaraderie and united cooperation during competitive sailing. The enthusiast who enjoys the beautiful classic lines of his ship. The great common denominator is a passion for old boats. During competition sailing, the diversity in involvement also reflects the style of competition sailing. One will see what's left of the old stuff, the other sails defensively. The purist sails with the materials of yesteryear, but there are also those who do not shy away from ultramodern adjustments, such as a carbon fiber mast. But then camouflaged so that it looks like wood at a distance!

It is generally assumed that both the phenomenon of (sailing) yacht and competition sailing originated in the Netherlands. When Charles II of England chose the yacht as a means of transport from the Netherlands to England for the Restauration in 1660, the yacht became a popular means of water transport for the English elite. Competition was the result of competitive sailing, Great Britain became in a sense the cradle. New materials were introduced: steel replaced the much more laborious wood, polyester was again superior to steel. Dutch shipyards specialized and many British yacht designers had their yacht built in the Netherlands. World War II and the days after that brought scarcity, as a result of which the Dutch took over old British boats, which were often lovingly restored over time. Thus interest in the "old stuff" continued and we can still enjoy many old boats today. In 1982, owners of classic sharp yachts joined forces to form the Association of Classic Sharp Yachts (VKSJ), which is now the conservation organization for that category of ships within the Federation for Sailing Heritage in the Netherlands (FVEN).

The VKSJ maintains, under the articles of association, competition sailing and has developed its own rating to ensure that competition sailing with classic sharp yachts is as fair as possible. New developments are closely monitored. The VKSJ is the conservation organization for Classic Sharp Sailing Yachts. The VKSJ organizes competitions, develops and improves a separate rating system and retains the knowledge about (competition) sailing with classic sharp yachts. The organization is one of the initiators of the Dutch Classic Yacht Regatta, one of the largest, if not the largest classic sailing regattas in the Benelux. 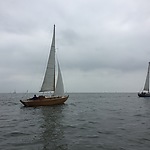 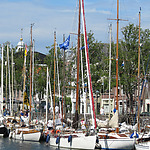 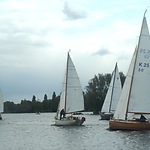 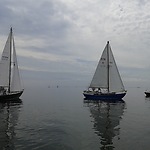