The Agricultural Show Opmeer Foundation has been organizing a full day on the first Monday of August for 110 years, in which the agricultural sector is showing itself to the public in the broadest sense of the word. The day attracts an average of 10,000 visitors each year.

The farmers bring their (small) cattle to Opmeer for an inspection, breeders with their (jumping) horses come to the eye of a critical jury. With all of that, the audience experiences it in its own way. The organization always provides text and explanation. This is also the day that West Frisians who want to keep the traditional costume alive can wear the West Frisian costume.

After 110 years, this Agricultural Show has become a permanent part of a family day. Many volunteers and the board ensure that everything runs smoothly.

The foundation and its supporters mainly consist of enthusiastic professionals who want to show the agricultural side of West Friesland. From this passion, an agricultural show has been set up, with farmers in particular forming the backbone. They show their own profession as it were, the audience enjoys it just as much. In fact, the Agricultural Show has been the meeting place for the entire region for 110 years. For example, the concours hippique is such a crowd attractor, where the organization gives everything it has got. The organization has 10 board members and 80 volunteers.

The Agricultural Show Opmeer Foundation has a long past. The Agricultural Day as it was once called, was founded in 1889 by, among others, doctor van Balen Blanken from Spanbroek (Buurtorp). The aim was to improve the knowledge and skills of farmers in the Noord-Holland region. Because in that period, the agricultural situation seemed to be falling behind somewhat, compared to the improvements elsewhere in the country. Livestock farming needed a boost. And got it.

Opmeer is located in the middle of the West-Friesland region. That also determined the character of this Agricultural Show from the outset. It has changed step by step into a family day, where young and old can not only see what agriculture, animal husbandry and equestrian sports have to offer. You can now also stroke, touch or smell all of this. The Agriculture Day now brings a much wider audience into contact with the agricultural sector than was originally the case.

Added to network since: February 2019 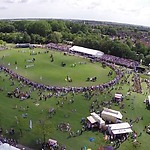 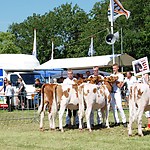