The march of the Diepenheim Shooters

The march of the Diepenheim Shooters comprises three elements: the announcement of the march, a week before the actual feast, the parade along the old town hall and the three castles, on the day itself, and finally the highlight: the popular games. The announcement is done by Klepperderk, the town crier, and the members of the shooters board, accompanied by drummers and the roaming orchestra ‘De Kleppers’. They make a round tour through Diepenheim to invite the inhabitants for the feast, a week later. The parade and the popular feast always take place on the Saturday afternoon of the last full weekend in September. The parade consists of officers, many others with a specific position, the shooters king and his royal wife and the youth king’s couple, all in traditional costumes. Furthermore the Harmony Diepenheim, the Stedeker Krummels and the National Riding Association take part in the parade. Buffoons play a special role in it. They are played by unmarried young men. Their costume differs from that of the other members and their hands and faces are blackened. The buffoons have the longstanding right to blacken unmarried girls during the parade. The parade passes the old town hall and the three inhabited castles. At the town hall the parade is welcomed by the Mayor and Aldermen and at the castles by the residents. The king’s couples are presented to the castle residents by the captain and they receive presents. The parade finally moves to the festival grounds, where the popular games take place. They comprise the king’s shooting for the men, bird throwing for the women, kuipsteken (ring tilting variety) and musical chairs. The winners of the king’s shooting and the bird throwing form the new shooters king’s couple that may take part in next year’s parade.

The Shooters have more than eleven hundred members, out of 2800 inhabitants. Membership is only possible from the age of sixteen. Ninety percent of the youngsters of that age join indeed. The Diepenheim Shooters have a social, a cultural and a tourist function.

At the end of the eighteenth century the protective function of the three civic shooting guards disappeared and they were combined in one mutual shooters group. It had primarily a social function. The shooting was practised as a game during the annual shooters festival. With the exception of the crisis years and World War II, the king’s shooting is an annual tradition. In the nineties it was stipulated that the Shooters march on the Saturday of the last full weekend in September. The starting point has been altered as well: at first a (varying) bar, as of 1987 the starting point became the own club house. The parade nowadays passes three castles and is about three miles long. In the beginning it was only a small procession and it consisted of around twelve members of the Shooters and the harmony and the costumes were basic. The buffoons did have their special costumes, though. As of 1970 women were allowed to walk in the parade and at that moment the bird throwing was introduced as a game. In the eighties the number of members of the Diepenheim Shooters increased, which resulted in a bigger parade and new positions, such as sutlers, flag bearers, a standard-bearer and Klepperderk.

Added to inventory since: August 2015 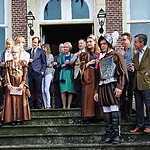 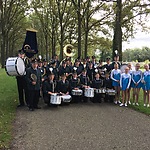 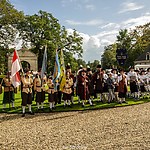 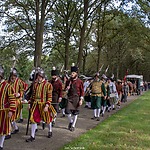 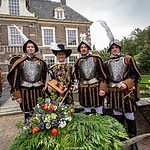 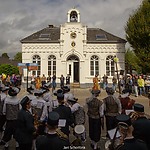