Flag throwing is swinging a colourful flag of about 80 x 80 inch, in an artistic and elegant manner. The flag is attached to an eight feet long pole. The lower part of the pole has a counterweight, a ball, to acquire a favourable balance point. A series of turns are performed, on music or drum rolls. Elegance in the movements is important. The patterns must, as it were, flow into each other. Flag throwing consists of three rounds. In the first round the flag thrower is encouraged. The flag is thrown above the head, to give courage. Subsequently the flag is turned around the neck, the loins and the knees, to indicate that one should even be prepared to give one’s body, one’s life. The second round symbolises the fight against evil. The flag is, among other things, directed at heaven, at God. Some low to the ground turns are made, the flag thrower steps over the flag and throws it high up in the air because the enemy is trying to seize the flag. In the third round one reaches victory over evil by prayer. Finally the flag can be thrown up high as the sign of victory.

The over sixty civic shooters groups and guilds in Gelderland almost all have flag throwers within their ranks – a total of more than 500. The shooters guilds in Gelderland are united in the Federatie van Gelderse Schuttersgilden en Schutterijen ‘Sint Hubertus’ (Gelderland Shooters Guilds and Groups Federation ‘Saint Hubert’). The inhabitants of a village or town with a shooters group or guild are involved in flag throwing. After all, the flag throwers throw their flags several times a year as a tribute to events in their residence.

Hardly anything is known about when or where flag throwing was created. One can only say that the flag arrived in Europe in the twelfth and thirteenth century – the age of the crusades.  Flag throwers started to accompany military forces, together with the drummers, to arouse them and to impress the enemy. Later on it became a spectacle. The flagpoles were short, initially. In the eighteenth century the ball of lead appeared, as a counterweight on a longer pole. Swinging was made easier this way and the patterns went smoother. Besides the classical flag throwing, acrobatic flag throwing sprang up. There the flag thrower presents all kinds of tricks with the flag, often in a group of two or three, always taking care that the flag does not touch the ground. From the twentieth century competitions for group flag throwing and individual acrobatic flag throwing have been organised in Gelderland. Six matches a year are held momentarily, at various places in the province, divided over four shooters circles.

Added to inventory since: September 2014 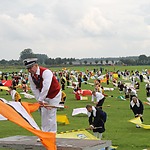 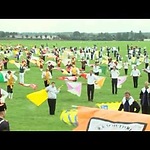 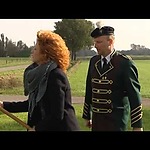 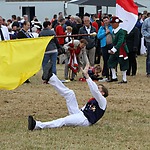 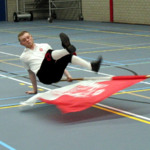 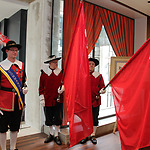 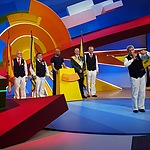