The Metworst Races is an annual race with horses on the morning of Carnival Monday. A metworst is a typically Dutch sausage. Only members of the Society of temporary bachelors ‘De Metworst’ can participate: unmarried men, born, raised and residing in Boxmeer. The race consists of a knock-out race of generally thirteen rides and is held in the Vortums Veld (Vortum Field), between Sambeek and Vortum-Mullen. Thousands of people leave for to the field in the early morning to watch the rides. The horses must be medically certified by the race vet. The riders must wear solid white trousers and a solid blue blouse, with a red ribbon on the left arm, and a crash helmet. Before the finals there is a draft horse race. The horses are judged on appearance. The winner of the finals, the King’s Ride, is King of the Metworst for one year and fetches the annual inheritance tax in the form of goods from the ‘Belaste Hoeve’ (Charged Farm) in Vortum. That is his prize, which also comprises a yards-long metworst sausage, a loaf of bread, half a pig’s head and half a case of beer. The Protectors decorates him with a silver king’s shield. Subsequently the King, accompanied by the other riders and the Gekkekar (Crazy Car), returns to the centre of Boxmeer, where he is crowned by the Protectress. If a King of the Metworst wins for three years at a row, he may call himself Emperor of the Metworst.

The Vereniging (Society) ‘De Metworst’ organises the annual Metworst races. A prominent position is reserved for the Protectress of the society, Nina Jilesen. As descendant of Esquire Louis van Sasse van Ysselt, she has the task to safeguard the tradition and to act if necessary. Practically the whole population of Boxmeer goes out to watch the Metworst Races each year. Riders, horse-owners and stable masters in Boxmeer and surrounding area are involved. The bars and restaurants in Boxmeer also play a significant role.

The year 1740 is designated as the founding year of the Society ‘De Metworst’. In a deed of sale dated June 18th 1739, the so-called inheritance tax in favour of the unmarried young men of Boxmeer is mentioned. In 1853 the municipality of Boxmeer tried to redeem the inheritance tax. The first Protector of De Metworst, Esquire Louis van Sasse van Ysselt, blocked this in the village council. The Society ‘De Metworst’ became the rightful claimant to the inheritance tax. The regulations of the society describes the objective as: to maintain the old custom, that is believed to be constituted by Lady Aleida in the fifteenth century. The honourable lady had promised the young men the yield of the inheritance tax of a farmhouse in Vortum. The story goes, that Lady Aleida had gone off the road with her carriage and that the Boxmeer riders led her to the right course. The inheritance tax is paid in kind: a seven ells long metworst, a loaf of bread and a raisin bread, two casks of beer and half a pig’s head. The first King  of the race was mentioned in 1556. As of 1600 the list of Kings is getting more complete. We know that in 1857 a parade of a hundred riders on horseback rode to the Vortums Veld. In 1928 the 75th anniversary of the protectorship of the Family Van Sasse van Ysselt was celebrated with a grand parade. Through inheritance Nina Jilesen recently became Protectress. In 2014 around ten thousand people visited the races.

Added to inventory since: May 2015 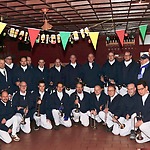 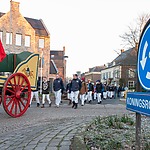 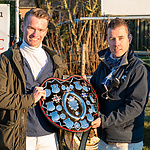 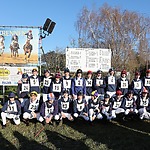 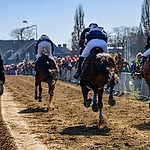 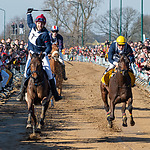 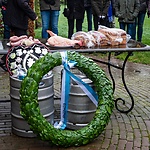 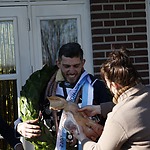 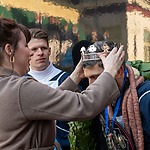