The cultivation, harvesting and processing of tobacco and the passing on of this cultivation as it took place on the Heuvelrug (ridge) for a long time until 1965. Once or twice a year the cigar maker is invited to show his craft. The theoretical and practical transfer of the knowledge to younger generations who no longer know the tradition and who no longer practice the profession.

Practitioners and people involved are the volunteers with a background in tobacco cultivation. Customers are traditional (often hobby) cigar makers. And the visitors of the museum.

Europeans are introduced to tobacco after the travels of, among others, Columbus to South America. In the Netherlands, tobacco has been grown in Nijkerk, Barneveld, Ede, Amersfoort and on the Heuvelrug. Cultivation in greenhouse boxes became known in the early 17th century as the 'Dutch method'. After important trade in the 18th century, tobacco around Amersfoort had already disappeared around 1900. In the 1960s the rest had to stop because cultivation became impossible due to mold.

Knowledge and practices concerning nature and the universe Traditional craftsmanship 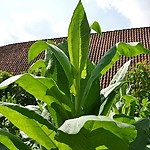