Maroons are descendants of escaped slaves, who initially started to live in tribal communities in the interior of Suriname. Maroons  from the six tribal communities in Suriname are living in the Netherlands as well. A characteristic of their culture is the authority structure. Every Maroon tribe has a chief (granman) who is assisted by captains (kabiten), who are in turn assisted by basiyas (supervisors). Every Maroon tribe has its own language. Every tribe further consists of family groups (los) in which the kinship is passed on from mother to daughter. Other important elements of the culture are the life cycle rituals, for instance after a birth, and the different rituals when a child reaches adulthood – gi pangi for a girl (offering the girl a piece of fabric) and gi kamisa for a boy, who receives adult clothes. Other elements in the culture that the Maroons want to safeguard are music and dance, the cuisine, the knowledge of medicinal herbs and plants. It is an oral culture; little has been documented, although the Maroons do make use of social media nowadays. The core values of the Maroon culture are: encounters, confidence, individuality, spirituality, tradition and amazement.

Between 1650 and 1830 slave traders took more than a quarter of a million Africans to Suriname. A number of these people were able to escape from slavery. The hinterland of the plantations was an area of moors and jungles. The escaped slaves felt quite safe there. They built villages and lived off hunting and fishing. On October 10th 1760 the colonial authority concluded the first peace treaty with one of the Maroon tribes, the Aukan people. This group herewith obtained legal freedom and territorial rights in the interior. This date and this first treaty are engraved in the memory of the Maroons. Subsequently the authorities concluded treaties with the Saramaka and the Matawai in 1762 and 1767. As of 1974, October 10th is officially the Day of the Maroons, a national holiday in Suriname. In 1765 missionaries arrived in the Maroon territory. Some Maroons adopted the Christian belief and let their children go to school. Today there are more than eleven thousand Maroons living in the Netherlands. The Maroon culture is not very visible in the Netherlands. Nowadays an active identity policy is applied by Maroons who are proud of their own culture. They pass their knowledge of certain life cycle rituals on to new generations; at meetings attention is paid to traditional costumes and rituals, and they give lectures and workshops on Maroon culture. At celebrations of the national Day of the Maroons on October 10th not only all kinds of items from the Maroon culture are shown, but books are sold as well. In large cities there are shops with all sorts of information on the Maroon culture, like the vanodoe-shops, which sell traditional herbs and medicines.

Added to inventory since: October 2015 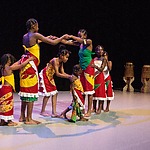