For a hundred years all primary school children in Breukelen are allowed to come and eat free 'poffertjes' (mini-pancakes) on 3 October at the Old Dutch Mini-pancakes and waffles stall D. van der Steen.

After handing out poffertjes there will be a lecture and a commemoration for the inventor of the tradition: Leonard Corneille Dudok de Wit, a rich, eccentric former resident of Breukelen.

People involved are the primary school children of Breukelen who enjoy Poffertjesdag every year. Joop and Lia van der Steen from the Old Holland Poffertjes and Wafelkraam D. van der Steen and their poffertjes bakers maintain the tradition with great pleasure. Other people involved are the residents of Breukelen who commemorate their colorful former fellow townman on this day.

From 1843 to 1913 Leonard Corneille Dudok de Wit lived on a country estate near Breukelen. This extremely wealthy man organized many activities in Breukelen, also for the youth. He offered older children school trips and handed out poffertjes to the young children in the village on his birthday, 3 October. When he died, it turned out that he determined per tradition that this tradition should be continued. The money reserved for this purpose was placed in a specially established fund, the LC Dudok de Wit's. De 'Oud Hollandsche Poffertjes and Wafelkraam D. van der Steen' has been distributing poffertjes to primary school children on 3 October each year since 1915, financed from this fund. 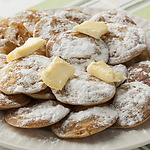