In the distillery of the Jenever Museum in Schiedam, malt wine is produced according to the method from the late seventeenth century. The first action is to ‘malt’ barley in a maltery. The barley grains are then soaked in water to let them germinate. Within the barley grain enzymes develop, that  saccharify the mash (amylase). The germinated barley, called green malt, is subsequently dried. Rye and barley malt are milled in Schiedam. A mash is made of rye flour, barley malt (sometimes maize), water and yeast. It is made at ‘saccharification temperature’, between 122 and 149 °F, and must be stirred for at least two and a half hour. When the mash has cooled down, yeast is added and the fermentation process begins. Yeast cells live off sugars and produce alcohol. After a few days an alcohol percentage of about 6 percent has evolved within the mash. The alcoholic mash is slowly warmed up to boiling point in a copper kettle (alembic). The boiling point of alcohol is lower than that of water, so the alcohol will evaporate first. The alcohol vapour that is released in the distillation process, precipitates in the cooling coil that runs through the cooling system to subsequently run to one of the floor barrels. This so-called ruwnat (low wine) is then distilled once more, producing a heavier wine, enkelnat (single wine) with 24 percent alcohol. After the third distillation it is bestnat or malt wine, with an alcohol percentage of 48 or more. In the Jenever Museum the malt wine is finally processed into malt wine jenever by adding extracts of the juniper berry.

The Jenever Museum takes care of the safeguarding and the promotion of the Schiedam malt wine distillation craft. It is supported in these tasks by the Schiedam Jenever Guild Het Gulden Glaasje and the Friends of the Jenever Museum Society. The municipality wishes to raise its profile with jenever. Many people from Schiedam want to preserve this craft.

In the seventeenth century malt wine distilling sprang up in Schiedam. Very soon there were many distilleries in Schiedam. Malt wine jenever was taken along by the Dutch West India Company in their triangular trade between the Netherlands, Africa and America. The peak of the Schiedam malt wine jenever was reached between 1850 and 1900. There were almost four hundred distilleries and dozens of malteries on a population of around twelve thousand inhabitants. As of 1880 more and more distillation columns were used, enabling a much simpler way of reaching a far higher alcoholpercentage than by the traditional distilling method. The number of distilleries where the Schiedam malt wine was still produced in the traditional way decreased. When the craft threatened to vanish, the Jenever Museum was opened in 1996. Visitors can follow the whole process of distilling Schiedam malt wine in this Museum. Here, as well as in the Distillery De Tweelingh, malt wine is produced that may bear the Seal of Authenticity of Schiedam. This Seal of Authenticity was introduced in 1902 and guarantees a ‘real Schiedam jenever’. It goes with a serial- and bottle-number and the signatures of the mayor and the town clerk of Schiedam.

Added to inventory since: October 2014 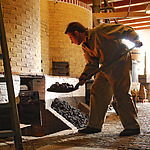 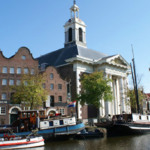 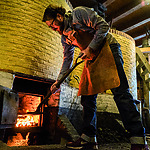 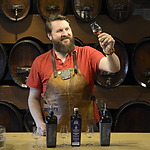 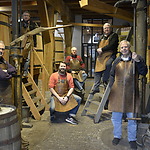 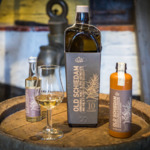