Carbide shooting is done on New Year’s Eve. The year is ‘banged out’. Particularly boys find it ‘cool’ to produce loud bangs with an old milk churn. In the run-up to the new year groups of friends gather to prepare for the carbide shooting together. This is accompanied by a lot of conviviality, excitement and fun. For carbide shooting a little carbide is put in a milk churn. The milk churn is placed on a frame, the opening pointing in a certain upward angle. This keeps the churn steady and prevents it from being launched backwards by the force of the explosion. The carbide is wetted a bit and the churn closed off with a synthetic ball. A gas is produced in the churn. Then a little flame is held at a tiny hole in the churn. The result is an explosion, shooting the ball many yards away. The strength of the bang also depends on the duration of the gas forming. There are villages where churns are lined up and the shooting is carefully planned. Carbide shooting is done individually or competition wise at locations determined by laws and regulations. There are rules for competitions. The one with the most yards is crowned as winner, a title of honour that he or she may wear for a year. For the participants ‘being there’ is important, as well as the relaxed social atmosphere. Enjoying traditional snacks and drinks (pea soup, deep-fried dough balls and carbitter), the attendants celebrate a beautiful New Year’s Eve together.

In the beginning of the twentieth century carbide shooting was already popular with young men. Shooting was done to mark transitions within the year (from the old to the new year) and within life (‘shooting the bride loose’). Carbide was used during World War II for bicycle lighting and the village blacksmiths used it for welding. In rural areas milk churns of the right size and carbide were easily obtained. During the first years after World War II people mostly shot individually. In the middle of the seventies carbide shooting evolved into a more social activity. Men united and went into competition with each other to shoot the lid of the milk churn as far away as possible. The shooting was moved from the farmyards to the village greens. Nowadays organised carbide shooting events – like the Open Championship in Drenthe – take place on sports grounds and public areas. In the eighties the lid was replaced by a synthetic ball, for safety reasons.

Added to inventory since: June 2014 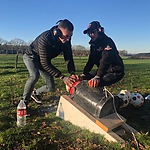 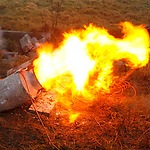 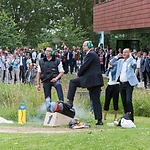 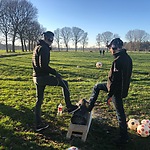 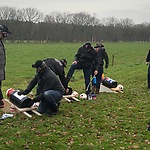 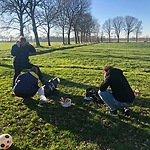