Each year on the last Sunday of June, the Schaelsbergergank, or in the Valkenburg dialect: the Sjaasbergergank moves up the Schaelsberg hill for an open air mass near the Valkenburg hermitage. Choirs and bands accompany this pilgrimage to the former hermit’s lodgings with a chapel on the hill. Long rows of benches stand next to the chapel, this is the spot where the priest of the Saint Maurice Parish in Schin op Geul will celebrate mass. A choir graces the open air mass and the civic shooters guild forms the Guard of Honour. The priest blesses the special ‘teunisrolls’, baked with medicinal herbs. They owe their name to the patron saint of the hermitage chapel, Saint Anthony. The teunisbruèdsjes, in local dialect, are distributed among the believers. After mass the civic shooters guild officially opens the Leonardus Fair with a series of special, traditional shots. The Fair is a mix of traditional and modern attractions, attractive for a wide public. Religious and worldly elements have joint in this Limburg tradition.

In 1977 the Stichting (Foundation) Sjaasbergergank was established. Apart from this yearly pilgrimage, the foundation organises the activities associated with the ‘gank’: the open air mass and the Leonardus (or in dialect: Leijenaarts) Fair. The objective was to give a broad character to the event, with a cultural aspect next to the religious meaning. The celebration of the mass is graced by eight choral societies. The priest of the Saint Maurice Parish in Schin op Geul celebrates the mass and the civic shooters guild serves as Guard of Honour. The Sjaasbergergank Foundation also manages the hermitage chapel with the hermit’s lodging and the Cross with its fourteen Stations. As owner of the area with buildings and as the main sponsor, Natuurmonumenten is closely involved in this tradition. The Sjaasbergergank attracts numerous pilgrims, curious minds and, of course, visitors of the Fair.

In 1687 the Franciscan father Laurentius Ploum was given permission by Count Jan Gerard Hoen van Carthyls to settle down in the hunting cabin on the Schaelsberg hill. Fifteen hermits followed after him. Time rebuilt the cabin to a stone house with chapel. The fifth resident, hermit Arnoldus Haesen, explored the healing power and the influence of herbs on cattle from the Limburg landscape. He mixed herbs in rolls. Peasants from the whole surrounding area came to the hermitage to fetch the rolls. Since 1758 the influx to the hermitage had become so massive, that it was decided to celebrate the Holy Eucharist in the open air in front of the hermitage. After the service the believers took ‘teunisrolls’ with them and went to the Fair. The French dominance put a temporary end to this pilgrimage and the Fair. The mass was relocated, but afterwards the believers kept going uphill, to the hermitage. During World War II the ‘gank’ and the associated Fair were forbidden. In 1969 the tradition was reinstated. In 1974 the estate with the hermitage was transferred to Natuurmonumenten.

Added to inventory since: June 2013 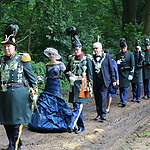 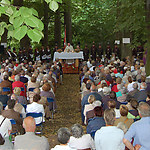 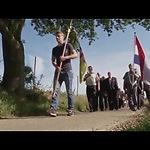 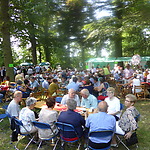 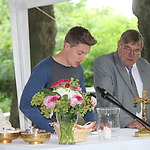 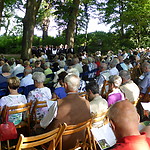