The Brielle Masquerade is a costume party on the evening of December 5th Klaassielopen in Brielle. Adults and some of the children walk through the streets of Brielle, masked and costumed, past the steps of the museum on the Market, where the mayor and the aldermen await them. Since a few years Sinterklaas has also been present there, asking the costumed people questions. The most ingeniously costumed people can win a prize, that is determined by a jury. The participants criticise the local or national politics or certain malpractices in a playful manner, or represent an amusing situation. Speaking is not allowed, but singing or making music is. The Masquerade begins at 7 PM and ends at 8 PM with awarding the Fons Löbkerprize, a silver-coloured mask that is named after a resident of Brielle who has done much for the Masquerade. Sinterklaas songs are played and there is cake and soup for everyone present.

The organisation has been in the hands of the Stichting Kunst en Cultuur Brielle (Art and Culture Foundation Brielle) since 2012. As of 1929 to 2012 it was done by the local tourist organisation. Everyone in Brielle can join and the ones who do not participate are part of the celebration as spectators. Groups as well as clubs as well as individuals take part in the competition. The municipality of Brielle and the mayor and aldermen play an important role as facilitators and attendees. Sinterklaas, of course, is also an indispensable figure in the whole of the Masquerade.

In 1870 Brielle had its first Sinterklaas parade, with a long procession of costumed and masked people playing the fool. Ever since that time the custom has been that costumed and masked people went through the town on Sinterklaas evening. The annual rhythm has only been interrupted by the two world wars. In 1929 the tourist organisation started to organise the feast and awarded prizes for the most beautiful or original representations. The peak of the Masquerade was reached in the fifties and sixties. From 7 PM all participants gathered at one point and moved through the inner town in a long procession. The big challenge was to appear in the most creative and spectacular possible way. In the eighties of the last century the Masquerade became a silent tour. No music or other sounds were to be heard. From that moment on the popularity dropped drastically, until there were only two participating groups left in 2012. In that year the organisation was taken over from the tourist organisation by the Art and Culture Foundation Brielle. It was then announced that the Masquerade would not be held anymore if there would not be more participants in the following year. In 2013 there were twenty participants. From this moment on the popularity has slowly gone up again. As of 2013 music and singing have been reintroduced and Sinterklaas has been present. Beforehand the tradition of the Masquerade was passed on from parents to children. The Foundation intends to go to primary and secondary schools, to tell the children about the history and the significance of the Masquerade.

Added to inventory since: January 2016 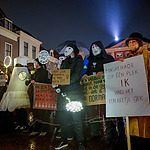 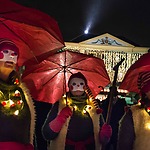 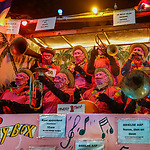 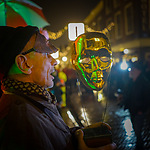