Almost the whole of the Netherlands sometimes eats a cheese sandwich. You could even say that the Dutch people derive part of their identity from the cheese sandwich. What is special about this culture is that it is found in all layers of society. From young to old we have breakfast, lunch and dinner with it. The elderly and small children often eat the classic sandwich with cheese, teenagers a sandwich and others again a soft white bun with a slice of cheese.

The cheese sandwich has a long and broad history. In the second half of the nineteenth century, eating sandwiches with cheese developed into a standard morning ritual throughout the Netherlands. Dutch people are known as cheese heads. This term comes from our southern neighbors. During the Belgian Revolt (1830-1939), Belgium no longer wanted to belong to the Netherlands. They called the Dutch people the word cheese heads during this period. Not entirely justified, because they also liked to eat cheese.

And what does the Dutchman miss when they go on holiday? Exactly: a delicious Dutch cheese sandwich. Research also shows that cheese is the most eaten bread spread in the Netherlands.

Dutch people are called cheese heads for good reason. Almost every Dutch person regularly eats a cheese sandwich. This varies from a culinary sandwich in a restaurant, a multigrain sandwich with old cheese, to eating white buns during a peace mission in Bosnia during negotiations.

In that first negotiation week when things didn't go so smoothly, I In the evening, instead of having a good dinner, have a few bowls of bread and jugs of milk pressed on. 'If we can't figure it out, we'll just keep talking tonight while enjoying a white cheese sandwich and a glass of milk. That is a typical Dutch tradition, "I told them." (From an interview on Veteranendag.nl with Frans Matser, 2003)

Every Dutch person from young to old is involved in the cheese sandwich culture. A soft cheese sandwich, for example, is one of the first things a child learns to eat once it gets off breastfeeding. Toddlers learn how to spread a sandwich with cheese spread and the cheese sandwich often goes with them in the bread bin. In addition, there has been a national school breakfast since 2003 to continue to emphasize the importance of having breakfast. Even when children are not at school, many families at the table have the rule that children first have to eat savory (for example, a cheese sandwich) before they are allowed to eat sweet. In this way, many parents hand over the cheese sandwich to their children. This rule is not new and goes from generation to generation. No matter how old the cheese sandwich is, it is difficult not to come into contact with it regularly.

Even at a later age, Dutch people stick to eating cheese sandwiches. During lunch at work, in the nursing home. In many places where people come together to eat, cheese sandwiches are eaten. This makes it a real part of Dutch food culture.

The We Love Baking Foundation is a bakery collective. As true bread lovers, they organize, among other things, workshops and events focused on bread. An example of this is the exhibition "The Art of Bread". Various artists are hereby challenged to share their view of bread. In addition to the artists, a star chef is also challenged to prepare a dinner together with the Dutch BoulangerieTeam, inspired by the cheese sandwich. This way the diversity and richness of this culture is shared with a large group. Cheese sandwiches are for all levels of society and even for every moment of the day. The Netherlands gets up with it and goes to bed with it.

Both bread and cheese making have a long history. The first Dutch cheese kegs date from the Iron Age (around 800 BC). The production of cheese increased considerably around the Middle Ages. The story goes that the now popular fermented bread originated in Egypt (1500 BC), when a slave had accidentally left his dough for a day. The bread became lighter. Yet it took until the 19th century before we really switched to fermented bread in the Netherlands.

In the Middle Ages, cheese was a regular part of the meals of the normal citizen. The farmers and the serfs often ate this on rye bread and drank milk. The rich, the nobility and the clergymen ate wheat bread. From the 12th century the grain quality clearly improved. Partly because of this, the number of bakers in the Netherlands grew considerably. In 1491, eating cheese received an extra incentive because the use of dairy was abolished on abstinence days. Bread with cheese thus became a standard dish at the end of the Middle Ages with both the evening meal and with lunch and breakfast. popular. The Hague cook Iwan Kriens even made an attempt in 1915 (during the First World War) to also import the cheese sandwich into England when there was a shortage of eggs there. “A sandwich with some thinly sliced cheese is a favorite breakfast in the Netherlands. It is worth giving it a try, for example with Cheddar," The Times wrote at the time. He then worked at the Hotel and Restaurant School of England.

Even today, eating a cheese sandwich remains a popular tradition. Research shows that no less than four in five Dutch people prefer eating an old-fashioned cheese sandwich over eating from the canteen at work. 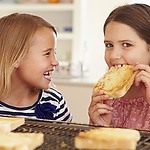