Each year the population of Brielle commemorates that Den Briel was captured from the Spaniards by the Sea Beggars on 1 April, 1572. The celebration is a local public holiday, which attracts tens of thousands of visitors a year and in which hundreds of Brielleners take part.

The heart of the tradition is the performance of an open air play about the capture of Den Briel, by members of the 1 April Vereniging (1 April Society). The play is set at four locations in the inner town of Brielle: the Town Hall, the harbour, the Langepoort and at the 1 April monument at the Dijkstraat. In addition, atmospheric images of 1572 are being represented by several street groups and there are performances by the groups the Spaniards, the Sea Beggars, the Beggars’ Children and the Flagbearers. Around the celebration on 1 April, a number of side-activities take place like the Kalknacht (Chalk Night) in which funny phrases are written on the windows of houses and shops with a bucket of chalk and a brush in the early morning of 1 April. Besides there is a Beggars Meal for the elderly, and a traditional Crafts Market that fits into the atmospheric image is created on 1 April.

The 1 April celebration is organised by the 1 April Vereniging, with its around 650 members. The Society has several groups like the Spaniards, the Sea Beggars, the Beggars’ Children and the Flagbearers, the Beggars’ Needle and about 25 street groups, depicting the atmosphere of 1572. Moreover the 1 April celebration is supported by a large number of groups among which: the medieval artillery society Compagnie van Brederode, the shooting society B.S.V. de Geuzen, Scouting, the Brielle dinghy rowers, musical society ‘Libretatis Primitiae’ and the Bell-ringers Guild.

Next to groups from Brielle there are a number of groups from outside town that take part in the April Fools’ Day Celebration, like ‘The Bergsche Battery’ from Geertruidenberg, ‘Vive les gueux’ from Alkmaar and a group of Czechs from the twin city of Brielle: Havlickuv Brod.

On April 1 1572, Den Briel, as the first town in the Netherlands, was liberated from the Spaniards by the Sea Beggars. After the celebrations of three centenaries in 1672, 1772 and 1872, the 350th anniversary was celebrated in the presence of the entire Royal Family in 1932.

Seven years later, on January 10, 1939, the 1 April Vereniging was established and on April 1 the Entry of the Sea Beggars and a play on the wedding ceremony of William of Orange and Charlotte de Bourbon were performed.

The April Fools’ Day celebration of 1947 was the first of its kind after the Second World War and in 1948 it was determined in the statutes of the society that the capture of Den Briel on April 1, 1572, was to be kept alive as a national event and annually commemorated on April 1 in some form or another.

In 1965 the first plans for the fourth centenary appeared, after which the centenary was grandly celebrated with a visit by Queen Juliana.

As of the seventies a capture play has been performed on April 1 of each year. The size of the event has been growing further and further since the eighties and a new play has been written: ‘For the key of the town’.  The texts of this play have been adapted on details and still form the basis of the celebration. The years of effort by the ladies of the Beggars’ Needle have caused that nowadays many people participate in the celebration in appropriate clothing. 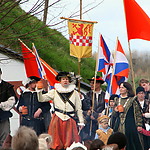 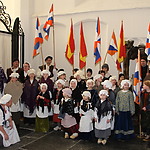 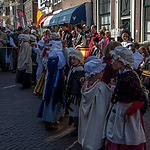 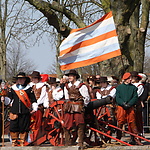 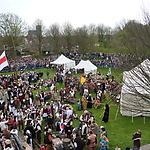 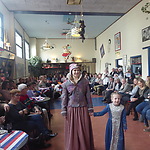 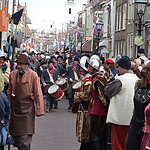 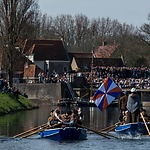