On June 24th, the birthday of John the Baptist (Saint John) is celebrated in Leenderstrijp. The inhabitants of this small village then gather at the Saint John’s Chapel for an Eucharist celebration in the open air. During the celebration Saint John’s bunches are blessed. The Saint John’s celebration is graced with guild-honour by the organising St. Jan Baptista Gilde Leenderstrijp (Saint John the Baptist Guild Leenderstrijp). Prior to the celebration, the guild calls the population of Leenderstrijp to join the guild to the chapel. At the local primary school, the children join in. A Saint John’s bunch is a bouquet that mainly consists of wild flowers. In Leenderstrijp the bunch comprises the following flowers, among other things: St. John’s wort, nut leaf, cornflower, forget-me-not, wild violet, Spanish grass and lime leaf. People often add a white rose, a red rose and a carnation from the garden. The Saint John’s bunch is made by the inhabitants themselves and people take the blessed bunches home again to hang them at the doorposts. Herewith the inhabitants ask for protection against severe weather, lightning strikes and evil spirits and for health for the ones who seek refuge in this bunch.

Added to inventory since: June 2016 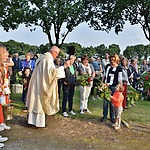