Although not everyone realizes it, sausages are actually culinary delights. An enormous amount of craftsmanship and knowledge is needed to make a sausage using traditional methods. Good quality meat, time, maturation, the right ratio of meat, fat, spices and salt. Just a few factors that influence the taste, quality and appearance of a sausage. Sausages come in all shapes and sizes, such as dry sausage, fresh sausage, liver sausage and smoked sausage. And for all these variants, a different method is needed. Take the dry sausage for example. The climate of the drying environment and the drying time alone determines the quality of the sausage. After all, a sausage that hangs in a cellar in the Netherlands for three weeks dries in a different way than a sausage that shows off three months on a facade in Italy. For sausage making, ground meat is mixed with salt, sugar, spices and then pressed into a natural casing. Which meat do you use? Do you use a coarse or fine grind? How much salt is needed? Which gut do I use? Do you increase the time for natural ripening or do you add ripening agents? Why is sugar needed? And which herbs taste good? All factors together ensure the quality and characteristic taste of a dry sausage. Whereas in countries such as Italy, Portugal and Spain, crafts such as sausage making, cheese making and drying ham are still an important part of the daily meal and culture, we are afraid that the craft of sausage making in the Netherlands is slowly being lost.

For decades, butchers throughout Europe have been passing on the craft of sausage from father to son. Craft butchers are happy to pass on their love of the profession, the unique family recipes, knowledge of technology, experience in specific skills and valuable information to the next generation. They want to shed the dusty image that sausage making has in the Netherlands and create enthusiasm among young people. With an eye to the future, driven butchers translate the old craft of sausage into new varieties with surprising flavors, without losing sight of the original craftsmanship. Because that is the only way the craft in the Netherlands remains alive and the artisanal product sausage is honored!

There are suspicions that the first sausages in Europe are around 5000 to 3000 years before Christ were made. The immediate reason was the demand for residual processing; after the beautiful and useful parts of an animal were cut, trimmings remained. The second important reason was the desire to preserve fresh produce for longer. Following the pickling (salting meat to extend shelf life), someone decided to keep the remaining meat in an intestine, and then let it dry. The shelf life was extended in this way. This was necessary because a fattened pig was only slaughtered in November (the slaughter month). The meat was pressed into cleaned intestines of pigs, sheep or cattle and preserved in this way for use only months later. The sausage as we know it was born. Industrially manufactured and therefore cheaper sausages are on the rise in the Netherlands. In addition, more and more butcher shops are disappearing, and with it also artisans who practice the craftsmanship of sausage. More and more sausage varieties with even more flavors have emerged, but the craftsmanship that comes with making sausages in the traditional way has remained! 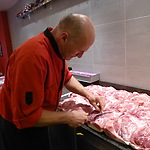 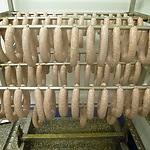 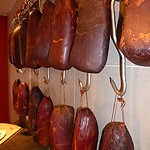 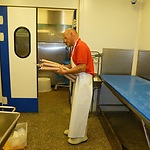 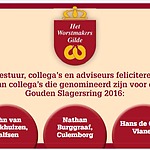