The distribution of herring in Niekerk

Each year, on the Wednesday before Easter, from 4 PM, a farm wagon, pulled by one or two horses, drives through the streets of Niekerk, Oldekerk and Faan. Two men on the coachman’s seat. The coachman drives the horses and the co-driver rings a bell to draw the residents’ attention to this tradition, that has been taking place as of 1476 already. On the wagon there is a ‘wooden barrel with herring’. The 750 herrings are, in reality, already in De Zaaier, the clubhouse directly beneath the tower of the twelfth century Liudger Church in Niekerk. By 4.30 PM the farm wagon arrives at the site of the church. There, surrounded by the already arrived village residents, the first herring is offered to the chairman of the board of the Menno Jeltemastichting (Menno Jeltema Foundation). The moment the chairman has experientially approved this herring marks the point that all the villagers can come and take up to four herrings. The herrings are free and intended for all the inhabitants of the former municipality of Oldekerk. These past years it has also been possible to get cleaned herrings. This costs 46 pence per herring. A couple of volunteers make sure that the interior of De Zaaier is made ’herringproof’. And thus, between 4.30 and 5.30 PM, under the watchful eye of the five board members and the coachman/co-driver at the background, several hundred fellow-villagers shuffle alongside the tables where the herrings are distributed, hoping that there will not be too many herrings left, but above all that there will not be a shortage (which occurred at least once). In case any herrings are left, they are donated to a care institution within the municipality or else another good destination is searched for.

The board of the Menno Jeltema Foundation, the residents of Niekerk, Faan and Oldekerk, volunteers, the coachman and co-driver of the wagon and the herring supplier.

The tradition of distributing herring on the Wednesday before Easter, dates back to 1476. In that year the gentleman farmer Menno Jelte left a legacy to the Pepergasthuis (a care institution) in the town of Groningen. It consisted of a stretch of 18 acres of land in the hamlet Faan, given under the eternal obligation that the guardians of the Pepergasthuis would send a barrel of herring to the church of Niekerk, each year during Lent. The church had to take care that the herrings were distributed among the poor people of Niekerk-Oldekerk-Faan. The guardians have nearly always complied with the obligation, even at times when the herring was expensive. As far as can be verified they only could not fulfil their duty in the French period and during some of the years of World War I and II. In 1976 the 500th distribution was exuberantly celebrated. The distribution of 1976 was also shown in the TV-programme ‘Van gewest tot gewest’ (From county to county). In 1979 the obligation was redeemed for 2000 guilders. The reasons for this: the herring had become too expensive and supposedly there were no poor people anymore in Niekerk-Oldekerk-Faan. Possibly the fact that the guardians of the Pepergasthuis were facing financial difficulties, played a role as well. The Dutch Reformed Congregation decided to transfer the redemption sum to the Menno Jeltema Foundation that was established to pursue the tradition. During the years following 1979, it appeared to be more and more difficult to control the funds. In 1995 a donation by the Rabo Bank increased the capital and guaranteed the distribution for a number of years. In the twentieth century a barrel with herrings was transported to Niekerk by regular service and then rolled to the church. The trip of the herring barrel and wagon through the village probably has already existed since 1976. During the past decades not all the herrings have been transported through the village anymore. Because of hygiene and other food regulations most of the herrings are already in the clubhouse where the distribution takes place. As of halfway the nineties it is possible to obtain cleaned herrings for a small fee. Most inhabitants of the villages do not master the technique of herring cleaning anymore, which lessened the enthusiasm to fetch the non-cleaned herrings. Also the original target group, the poor people of Niekerk, Oldekerk and Faan, has been decreasing during the past 60 to 70 years. Hence the fact that every inhabitant of the former municipality of Oldekerk is eligible for the herrings. The tradition is not only visible on the Wednesday before Easter; there is a statue, called ‘The herring eaters’, near the church in Niekerk. 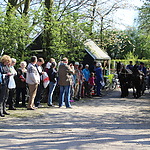 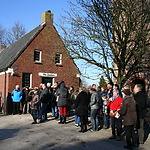 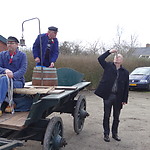 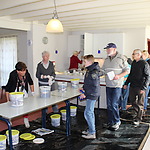 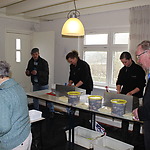 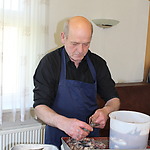 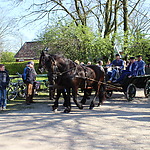 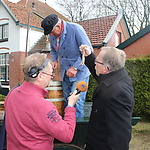 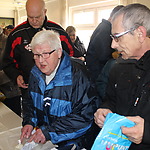 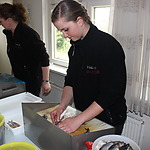 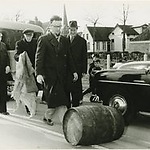