The Strontweek consists of the Strontrace (Shit Race), the Beurtveer (ferry with several ships), the Visserijdagen (Fishery Days) and the Liereliet (musical festival). The Strontweek is also known as the ‘exercise under sail’.

The week is annually held during autumn holidays and is preceded by the (shit) Supply Race with small barges. The barges carry manure from the Frisian hinterland, to be used for the Strontrace. On Friday Klompkezeilen (clog sailing) is organised for the school children of Workum.

The Liereliet takes place during the first weekend. It is a festival where musicians and singers from all over the world, sing and play shanties and on Sunday a maritime fair is held, with handicraft demonstrations.

The Strontrace starts on Monday. The idea is to make as much use as possible of sails, push poles or ‘hunting’ (pulling the boat forward from the shore). Only a map and a compass may be used for navigation. The winners receive the Silver Mush Spoon. The route goes via the IJsselmeer (Lake IJssel) and Amsterdam to Warmond. The way back is sailed via Haarlem, the North Sea Canal and the IJsselmeer, while carrying flower bulbs.

The Beurtveer is based on the old method of passenger transport around the Zuiderzee (when the IJsselmeer was still part of the sea). The ships pass several towns and villages around the IJsselmeer, taking passengers on the way. One is obliged to call at a number of places, in random order.

Fishery is practiced with ships like botters and jols, boats that were used for fishery in the past. With bottom-set nets pike perch and perch are caught and the nets are brought under sail and recovered. The fish is supplied twice a week in Workum and sold by an auctioneer.

The ships can be followed with a track and trace system. Some skippers apply the experience that they gain ‘under sail’ outside the Strontweek.

Some 30 to 80 ships take part in the Strontweek, including 29 for the Fishery. The number of crewmembers varies between 600 and 750.

At the market and the start of the matches, approximately 1000 spectators are present and about 200 people at the sale of the fish. The website attracts approximately 10,000 visitors per week during the event (www.strontweek.nl).

Many authorities are involved in the Strontweek, like the municipalities of Sud West Fryslan, Haarlem, Urk and others. Also the provincial authorities of Flevoland, Zuid-Holland, Noord-Holland as well as the national water management body, the water police of the National Police Force, the Frisian exploitation service for the environment and the Frisian water board.

The transport of shit by boat started at the beginning of the twentieth century, to bring fertile manure from Friesland to the bulb fields. The fishery as practiced during the Strontweek, came up in the 16th-17th century. The work on the different ships was relieved by singing shanties together, thus ensuring the hard work to be done in good cooperation.

The mechanisation of the 20th century led to more and more pressure on the transport with sailing ships, which also played a significant role in fishery.

For this reason the first Strontrace was organised in 1973, by Reid de Jong. Five ships, with a mostly young crew, joined in. A year later Fishery and the Beurtveer were added to the event.

The various elements grew fast: soon some 70 to 75 ships took part in the Beurtveer and the Strontrace. A few years later the maritime music festival was introduced in the event. For some years Klompkezeilen has been a fixed element of the Strontweek too. Due to the limited number of licences that are given out for the Fishery (only 29), lots are drawn.

Over the years changes have been made to make the sailing easier, like ‘lazy jack’ and ‘wishbone’ sails. 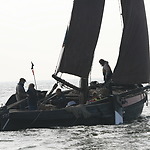 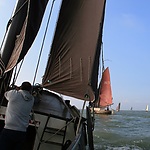 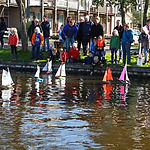 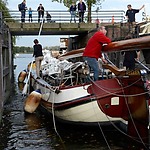 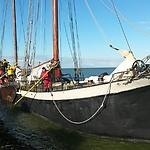 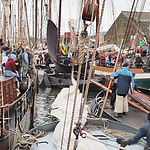 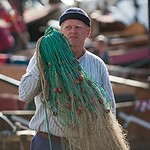