Every year, on the first Sunday of July, somewhere in the Netherlands or in Belgian Limburg the Old Limburgian Shooters’ Festival (OLS) takes place. Almost all civic shooters guilds in both Limburgs, with a total of around ten thousand shooters, take part in it. After the reception of invitees and shooters, there is an opening and flag parade in the morning.  The afternoon is reserved for a colourful parade of about 160 shooters guilds. There are participants in fantasy costumes, military uniforms and in guild costumes. The parade show takes place in front of the official gallery. The parade itself is already a competition. An extensive jury judges the most beautiful kings and queens, bielemannen (axe men), sutlers, sign carriers and bands and other parade participants. After the parade special competitions in exercise and flag throwing are held. The highlight of the shooters’ festival is the shooting competition. Every shooters guild has a team of six shooters. They must shoot bölkes (little cube-shaped blocks of wood) from the high hark (rake). In turn the shooters fire three shots each at the bölkes. When a shooter misses, the guild loses. The  six only ones who do not miss or miss as the last team, win the match and get den um (a bronze trophy sculpture). The shooters guild to which this teams belongs, may organise next year’s OLS.

The OLS bonds guild brothers and sisters from the Netherlands and Belgian Limburg. The guilds are organised in the Oud Limburgse Schuttersfederatie (Old Limburgian Shooters Federation). The festival is organised by a steering group and approximately ten working groups, supported by the federation. Local authorities and emergency services are closely involved in the organisation, for which a total of 900 to 1000 volunteers are needed. Led by a jury commission, 120 jury members are active. The OLS attracts around 35,000 visitors each year. Regional and local media always pay much attention to the OLS.

The history of the OLS dates back to 1876. The festival was initially called the Great International Shooters Festival. As of 1906 it was called the Old Limburgian Shooter’s Festival. To bundle the rules and regulations and to see to it that they are respected, the umbrella organisation for shooters unions in Belgian and Dutch Limburg, the Oud Limburgse Schuttersfederatie, was established in 1937. The shooting competition has always been very important. In the course of the years ever more attention was given to the parade. In the beginning every shooters guild had only a few drummers. Now almost every shooters guild has an entire showband. In the seventies of the last century sutlers, women in special costumes with a baskets of foodstuff, were introduced. The opening of the festival with a flag parade also stems from these years. The number of spectators, especially for the parade, is still growing. High religious and secular authorities are often largely represented. In 2006, at the centennial celebrations of the OLS, Queen Beatrix and Crown Prince Philip from Belgium were present.

Added to inventory since: March 2014 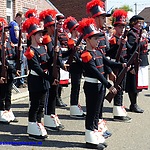 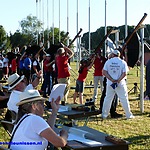 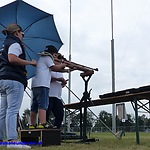