A stoetboom (bread tree) is a branch which was originally baked with white bread rolls around it. Stoeten, white rolls, were only eaten at heydays in the past, and they were a delicacy. On the first day at school after the summer holiday the pupils who are new at the school receive a stoetboom. Nowadays soft rolls and currant buns in plastic bags are hung in such a branch and treats, fruit or small gadgets too. They are often decorated with garlands as well. The story that the children were told while the stoetbomen were/are handed out was/is: in the school attic, above the headmaster’s classroom, a stoetboom grows and its branches broke off during a storm. Then the pupils of the highest classes start to stamp their feet on the attic floor, thus imitating the falling of branches. The broken-off branches of the stoetboom are subsequently, in the presence of parents and grandparents, handed out to the new pupils of the school. Afterwards the branches are taken home, where they are supposed to stand until all the treats are gone.

Probably handing out stoetbomen has been a custom from the end of the nineteenth century. At the beginning of the twentieth century the dough for the ‘stoets’ was kneaded around the branches and baked by the local bakery, branch and all. There is only one baker left who bakes the rolls on the branch. Nowadays the stoets are packed in a plastic bag and hung in the branch. The stoetbomen were meant as a treat for the pupils. Going to school robbed them of their freedom and made them miss their mother’s presence. Often they were also confronted with a teacher who spoke a foreign language (Dutch, instead of the local dialect).

This tradition is found in the northern part of the province of Groningen (roughly the area from Zoutkamp to Delfzijl and north of Bedum), also called ‘Hogeland’ (High land). The ceremony of handing out the stoetbomen is attended by parents and grandparents, though sometimes other family members and neighbours come too. Lots of pictures are made of the event. Parents and grandparents who received a stoetboom themselves as a child, gladly pass on the experience to their (grand)children. They urge the management and the teachers of the school, through the parents committee and participation council, to maintain the tradition. From a recently conducted survey it appears that stoetbomen are handed out at 25 primary schools in the Hogeland region. 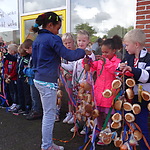 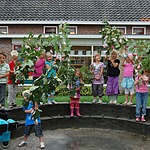 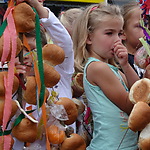 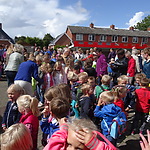 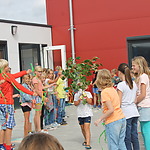 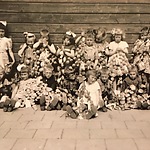