Opening Shrove Tuesday on 11/11 at eleven past eleven

Every year on 11/11 in the evening at 11 past 11 the Ganzegat goose is unveiled. This is done via a wind-up alarm clock. After this the slaughter song is sung and the clog dance is danced. Then you will be treated to a drink and rye bread with headcheese. The opening of 'vastenaovund' (dialect voor Shrove Tuesday) has traditionally been the beginning of the Carnival season.

Practitioners and people involved are Folklore group Dikkemik from the local history circle together with the carnival association and the inhabitants of Aarle-Rixtel.

This ritual was already in use until the 1970s. After a while no more. It has been in vogue since 2001. Older residents still remember the opening vastenaovund before it stopped in the 1970s and can now pass it on to the next generation from their own experience. 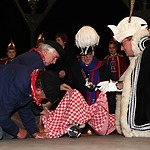