On the isle of Texel people celebrate Ouwe Sunderklaas (dialect for Old Sinterklaas). People roam through the villages, disguised and wearing masks, acting to mock current events in island politics or at a smaller social level. This is called ‘speulen’ (dialect for: playing). Although Ouwe Sunderklaas is celebrated throughout the island, there are differences among the villages. The feast begins at 5 PM, when the children give their performances. Sometimes they carry signs or cloths with texts, or a sound system with them. After an hour the children’s disco starts and at 7 PM the jury announces the winners. At 8 PM it is the turn of the adults. These performances are also judged by a jury. Playing lasts till 10 PM, after which everyone goes to the village halls and bars to celebrate. Around 11 PM the prize winners are announced.

Almost everyone on Texel takes part in Ouwe Sunderklaas in one way or another. Children grow up with the tradition, see it in the streets, hear about it or watch their parents, family or friends do it. The schools presently inform them about the tradition. Before the feast the Texel Journal forms a source of inspiration for the acted issues, with overviews of the most important recent local news facts. Besides that, the village committees play an important role by providing the facilities to act and meet, but also by judging and issuing the prizes.

The origin and the exact age of Ouwe Sunderklaas are unknown. However, it is a fact that celebrating ‘Ouwe Sunder’ was prohibited in 1816, because of the ‘scaring and disturbing of the peace and even appearing in the guise of beasts’. It is remarkable that a similar tradition exists on all the other Frisian Islands. On Texel there were two different dates to celebrate, originally: on December 5th it was Nieuwe (New) Sunderklaas and on December 12th Ouwe Sunderklaas. Nieuwe Sunderklaas was the feast of the costumed children. Ouwe Sunderklaas was a street festival, traditionally. It meant that illuminated houses were visited, but there were celebrations in inns and bars as well. Some think to find an explanation for these two dates in the fact that in earlier days roaming sheep were caught on December 5th and 6th, which were subsequently sold to the church on December 12th if they had not been collected. Until the beginning of the twentieth century people dressed in wide, white trousers with white cloths over them and a mask, the grim. On the head a tower hat was worn, made of heavy paper. After this period other disguises appeared and there was always one of a bear. After World War I up to 1935 and during World War II the feast was banned again. Nowadays the following day is used for naklasen (‘after-klasing’), while finishing the remains of drinks and food. Other changes are that it is now the rule that the masks are taken off after the speulen and that the village committees stimulate the feast with prizes. 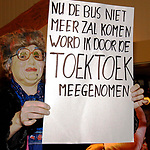