The Groningen egg ball is a local delicacy. It is a cooled hard-boiled egg that is wrapped in a layer of dough, more or less like a Scotch egg. The dough, the roux, consists of flour, broth, butter, egg white and breadcrumbs. Herbs are added to the dough, which can vary per maker. The tradition consists of the making and eating of the Groningen egg ball at various occasions. Every snack bar or cafeteria has its own ‘secret recipe’, but individuals also make egg balls, passing on the preparation method from generation to generation. There are different opinions on the ingredients of the Groningen egg ball, like whether or not to use curry. The egg balls are fried on a temperature between 356 and 365F and may be eaten warm as well as cold. Naturally, the Groningen egg ball is eaten within the province of Groningen in particular. They are eaten from the hand or as a component of a meal. The egg ball is virtually always consumed in company and is also very popular as a snack during outings. Comparing egg balls and making comments is, for many people from Groningen, part of the tradition, although a real Groninger will not easily present himself as a connoisseur or an expert.

Like more classical dishes, the egg ball was born out of post-war thrift: food that fills the stomach, composed of ingredients that were often relatively easy to find. The egg balls were rolled with crushed stale bread, soaked in water. The stale bread could also be ground into bread crumb flour, in which case egg white was used to make the flour stick to the egg. In one of the oldest, perhaps even the oldest known recipe of the egg ball, however, bread crumb flour was not used. This recipe comes from Mr. A. de Vries who, before opening the cafeteria Success at the Carolieweg in 1947, used to be a baker in the city of Groningen. The egg ball suppliers were, especially in the beginning, often bakers or confectioners. They had the stale bread at their disposal that was used for the preparation. Around 1950 many lunchrooms, cafeterias and automats served egg balls. It was a snack for day and night. Egg balls are now not only made with chicken eggs anymore; quail eggs are a more and more used ingredient. Restaurants, bars and gastronomy present egg balls or smaller versions as a snack with drinks, as Christmas baubles or Easter eggs, or as an appetiser at a multi-course dinner.

The bearers and practitioners of the Groningen egg ball tradition can be differentiated in two large, not necessarily separated groups, namely the makers and the eaters. Next, as an overlapping group, there are the critical comparers, who comment on Groningen egg balls. The eaters can be found, approximately from infancy, in every age category and every social class, at various occasions. From young to old, from festival to restaurant visitor, from wedding to funeral guest. As a collegial week closure or as a prize in bets: the winner or the loser gives a ‘round’ of egg balls. At home there is often a culinary family member who can be seduced to serve his or her second-to-none egg balls. The Genootschap Ambachtelijke Grunneger Aaierbal (dialect for: Traditional Groningen Egg Ball Society) endeavours for the safeguarding and transmission of the Groningen egg ball tradition. 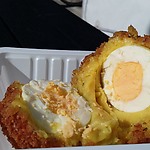