The aim of the shooters committee is to ensure that bird shooting and king shooting run smoothly during the Kottens School and Folk Feast.

The second day of the folk festival is all about the king shooting. This is largely supervised by the shooters committee. The day starts with the Dutch national anthem and at the end of the national anthem salute shots are fired with shotguns. Then the whole community goes to the shooter king of the previous year to be taken out. Salute shots are fired again upon arrival and departure. Salute shots are fired again upon arrival at the club building and after the new shooter's king has been announced. For the sake of clarity, shots are being fired with blanks (safety before everything). Traditionally, this is done with real shotguns. This intangible cultural heritage creates the necessary hilarity with the invited guests and those who are experiencing the feast for the first time, because they have never experienced this. This should not be lost for the next generations.

The shooters committee consists of local young men between the ages of at least 18 and around 26-27. When a member resigns, a new candidate is sought by the other members. In the past, the boys were asked. They remained on the committee until they got married or voluntarily left. Nowadays, most go out voluntarily. Then most have finished 8-10 years. This is because there is little or no marriage nowadays. For the young people in the neighborhood, it is always an honor to be asked for the shooters committee and to have a seat in it.

Kotten, directly adjacent to the border with Germany. In all likelihood, a shooters committee was established immediately, according to custom. In a newspaper clipping from 1906 we read how things went at the time.

From the 1906 newspaper: '' There the majesties were saluted with salute shots and the honors owed and surrounded by the crowd, they were led by the Shooters Committee to the festival building where they sat on the throne. The "Whom Neerlands blood flows through the veins" (the national anthem at the time), loud hurrays sounded before the King and the Queen. Due to circumstances, the queen was not fetched this year. ""

Basically, the way in which the shooters committee works has not changed much except for some legal changes. This appeared from some photos and documents that have turned up. 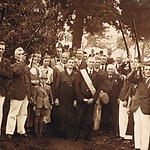 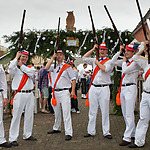 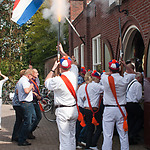 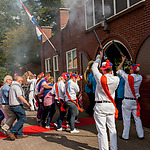 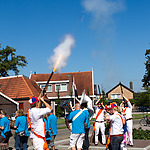