In 2017 the Child welfare stamps campaign is by far the largest annual school campaign in the Netherlands. In the last week of September primary school children go from door to door to sell child welfare stamps, postcards and other products, thus collecting money to help children who are less well off, at home and abroad. Pupils from the highest classes of primary education learn to do something for someone else. Next to educational, children and teachers consider the campaign as fun. Every spring, the Stichting Kinderpostzegels (Child Welfare Stamps Foundation) approaches the schools that took part in the campaign during the past years, with the question if they want to participate again in that year. The campaign week at the end of September begins on Tuesday with a First Order from a Dutch celebrity, by children who received help from projects that are supported, often in the presence of a participating school. From noon at Wednesday the pupils go from door to door to sell the child welfare stamps, postcards and other products. The selection, which varies each year, is made by the Child Welfare Stamps Foundation. Every year the child welfare stamps are designed in cooperation with the Post Office. At the beginning of November Child Welfare Stamps reveals the revenues of the campaign and the groups that won the schools competition (25 groups with the highest average revenues and five groups with the most creative entry). Most of the time there is nice publicity for the announcement of the revenues (youth news broadcast) and regional press for the combination with the schooltrip prize. In the following weeks the orders are delivered to the clients. Child Welfare Stamps thanks teachers and pupils for their participation in the campaign with a small gift.

Pupils and teachers of the highest classes of primary schools, the buyers of the stamps and postcards, postmen who deliver orders. The Child Welfare Stamps Foundation facilitates the annual campaign.

Child welfare stamps exist since 1924. In that year it was decided per royal decree to issue stamps with a surcharge for deprived children. At first only committees of volunteers sold the child welfare stamps, but in 1948, based on a teacher’s idea, master Verheul from Waarder, who had sent his pupils door to door selling child welfare stamps, a pilot projects was started in which pupils from a number of primary schools started to sell child welfare stamps. A great success. In 1949 it was rolled out nationally and thus the Child welfare stamps campaign as we know it today, started. Already in 1956 more than half of the number of schools took part in the campaign. An interesting detail is that in 1972 Prince Claus photographed his children for the campaign and that Crown Prince Willem Alexander did this at his turn in 2012, with his three daughters. The campaign was organised by the Foundation for Children from 1948 and the revenues of the campaign were distributed by the National Committee for the Child Welfare Stamps. In 1989 they merged into the Dutch Child Welfare Stamps Foundation. ‘For children, by children’ is – more than three generations later – the motto of the Child welfare stamps campaign. 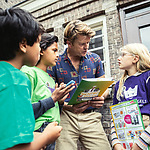 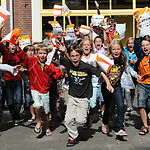 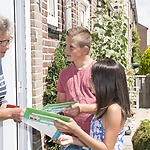 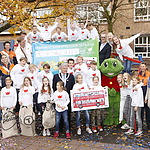 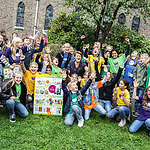 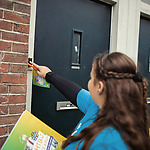