The Fruit Parade is a parade-on-wheels with floats that are decorated with all kinds of fruits, seeds and vegetables. The floats are built in various villages and towns in the region. In winter the float builders choose a design, after which the welding team constructs the frame of the float. This is covered with gauze, papier mâché or polystyrene. Designers colour the shapes and then the sticking can begin. The seeds are applied first and during the last week before the parade the fresh products: leeks, pears, oranges and garlic bulbs – all kinds of fruits and vegetables may be used. On the second Saturday of September the Fruit Parade moves through the streets of Tiel. A jury determines which float is the most beautiful and there is also a public award. Three categories participate: large floats, youth floats and floats in the open class. Since 2001 there has been a Children’s Parade.

There are seventeen ‘parade clubs’, consisting of many volunteers. The 24 mosaics in Tiel are also laid by volunteers. Plus the around a hundred children who take part in the Children’s Parade. The parade as a whole is sponsored by companies aiming at better name recognition or product promotion. The coordination is done by the Stichting 4-Stromenland (4-Stromenland Foundation). This foundation maintains contacts with the locations involved: Tiel, Buren, Culemborg, Geldermalsen, Neder-Betuwe, Neerijnen and West Maas en Waal. The parade attracts many thousands of visitors each year.

On September 23, 1961 the first Fruit Harvest Parade passed through Tiel. Fourteen floats came from the village centres in the Tiel region. The parade was organised by the Stichting 4-Stromenland, for the promotion of tourism in the river region between Meuse, Waal, Rhine and Linge. Within a few years the parade developed into an original and artistic spectacle. To involve the inner town of Tiel, mosaics were laid on the ramparts as of 1966. In 1969, for the first time, there was an exhibition in Tiel where the floats could be admired on Sunday. In 1973 the category ‘youth floats’ was introduced in the parade. Under the influence of young people the atmosphere amongst the float builders became more open and people began to support each other more. The floats became more colourful too. To make the Fruit Parade even more popular with the local population, the open class was introduced in 2008. This meant that clubs could participate in the event without interfering with the competition. The large floats have shown great technical developments in the last decade. More and more hydraulic techniques are applied. 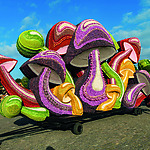 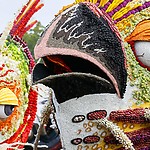 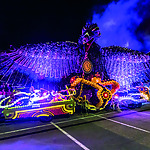