The Eelde Flower Parade is a competition on the first Saturday in September, in which fifteen neighbourhoods fight for the honour. Every neighbourhood builds its own float, decorated with dahlias. The parade season starts in March, when by lottery the choice is made which float the neighbourhood will build. The welding of the frames starts in May already. Flower pieces, made of dahlias and also other cut flowers, made by star arrangers from the whole Netherlands, show the latest trends in flower arrangements in the parade. Seeds and other materials may be used as well. Often costumed, face-painted people are portraying the theme on top of the floats. The floats are alternated with showbands and marching bands. The following Sunday is for the exhibition of the floats and for music, theatre and a fair.

The Stichting Bloemencorso Eelde (Eelde Flower Parade Foundation), as coordinating foundation, yearly organises the parade and the associated events: an exhibition, the dahlia fair and all entertainment around the parade, an event that attracts 90,000 visitors a year. Around three thousand volunteers, altogether, are actively involved in the flower parade. The working group Young Parade Eelde stimulates and organises the yearly Children’s Parade. The working group maintains contacts with the primary schools and organises a design competition for the pupils. In cooperation with training centre Terra, welding courses are organised for the float builders. The Eelde Village Community Foundation, a publisher, issues 50,000 copies of a parade door-to-door newspaper, as a special to the local newspaper Dorpsklanken.

In 1956 the management and board members of the horticultural school in Eelde visited the Flower Parade of Aalsmeer. On the way back, during a stopover in Hoevelaken, it was decided to start organising a flower parade in Eelde. More than twenty neighbourhoods were formed in Eelde-Paterswolde that would be busy building a float. The first parade was held on the runway of Eelde Airport. In later years the parade passed through the streets of Eelde-Paterswolde. In 1960 already, all parade neighbourhoods had been provided with a similar substructure for the special parade float. The floats became bigger and bigger. They did not fit into the sheds anymore. Therefore nowadays big tents are built for the construction. The parade was often given a suited motto (‘Olympiad’, or ‘The film’), but the themes can be of all times, like ‘Fairytales and sagas’ or ‘Sports and games’. Although the number of participating floats and bands has decreased over time, the parade quickly developed into an important event in the north of the Netherlands.

Added to inventory since: March 2013 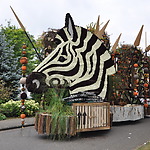 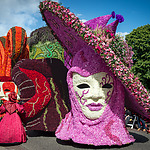 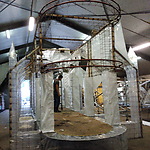 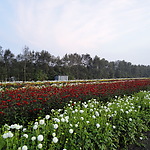 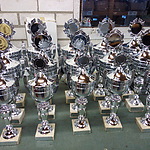 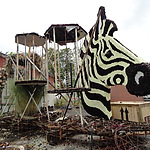