The Sinti Jazz Dutch style is an oral tradition that is transferred from the elderly to the young within the close-knit large families at the Sinti residential locations. The Sinti have mainly focused on music for civil occasions, such as performances in cafés and restaurants, and playing at weddings and other parties. This has evolved over the past decades into jazz clubs, theaters and festivals.

Thanks to centuries of tradition, Sinti have been able to develop their musical skills to great heights and have always been in demand. In the 1920s, jazz music originated in the United States and soon spread to Europe. Here too, the Sinti quickly made an important contribution and gave their own Sinti style to the music.

The combination of creativity and adaptation to local music and circumstances is the power of this tradition. Both the locally popular music and the music brought in from other countries have always appealed to the public. In the Netherlands, for example, we know the Miranda orchestra, which has even been awarded the status of a Royal Orchestra because of performances for the Royal Family. But well-known folk singers are often of Sinti descent.

In the Netherlands, the typical Dutch Style Sinti Jazz emerged in the 1950s. The musicians Waso Grünholz and Sani Rosenberg played an important role in this. Musicians do not work with sheet music, but do everything by ear and learn from other musicians by watching, listening and playing together. That guarantees the characteristic Sinti style and a great capacity for improvisation, which is a permanent part of this style.

The Sinti caravan locations are breeding grounds of great musical talent, which is transferred from the elderly to the young within the family. By living in grand families (grandparents, children and grandchildren live together), the music can be transferred well in the traditional way. The locations in Gerwen and Nuenen play a special role in this because the Dutch Style Sinti Jazz has largely spread from here and many leading musicians have been trained here. The rich music tradition does not stand on its own but is part of the broader Sinti culture of togetherness, cooperation and taking care of each other in family contexts.

Added to network since: October 2019 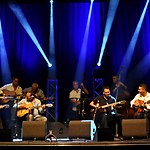 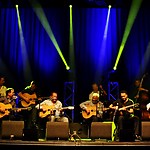