In the twelve university cities in the Netherlands: Amsterdam, Delft, Eindhoven, Enschede, Groningen, Leiden, Maastricht, Nijmegen, Rotterdam, Tilburg, Utrecht and Wageningen, plus The Hague, there are a total of forty-eight student social clubs.

Generally speaking, these associations have as their objective the reception and development and the general representation of students' interests at higher and scientific education institutions. Characteristic of the associations are the strong (and often lifelong) friendships that members make themselves during their membership. Through these friendships, which are strengthened by joining and dividing members in various associations, such as disputes and annual clubs, a large social safety net is created. Members regularly come to the society (the building of the association) to have a drink.

Within student associations, the mores, the unwritten rules, play a major role. Prior to membership there is the introductory period or hazing. The approach, duration and intensity of this differs per association. During this period the aspiring members get to know the rules, mores and traditions of the association.

Already in the beginning of the Dutch universities a tradition emerged among students of getting together while enjoying drinks and songs. Students automatically became members. The students then also started with the first forms of greens: the first-years were harassed until they gave a party for the senior-years, after which they were accepted by them.

After the French-Batavian period (1795 -1813) the first associations as we know them today began to form. The various hazing senates in Leiden, Groningen and Utrecht merged and became official associations. A little later sub-associations were created for rowing, bridge, chess and fencing. Debate, theater, music and cabaret companies were also established. After the first feminists, some associations decided to admit women as members and in a number of cities women decided to set up associations themselves.

In 1940, the ban on the presence and membership of Jewish students led to closing and the statutory cancellation of many associations. They went further in secret. Stricter supervision of hazing was introduced in the sixties and seventies. Many associations underwent a fundamental change and the number of members decreased. Due to the social pressure on student associations, there was a need to represent the associations nationally. The National Chamber of Associations was established for this in 1967. From the 1910s there has been a trend of study support by the associations. 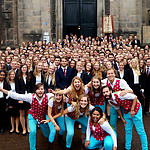