The Cramignon is danced in eight villages in the border region between South Limburg and Belgium. It is a round dance in which boys and girls hold hands and move through the streets skipping and zigzagging to the cheerful sounds of Cramignon music. Traditionally, only single boys and girls are allowed to participate in the Cramignon, but over the years this has changed, and everyone is allowed to join in. The captain of the ‘jonkheid’ leads the way in the Cramignon, holding a bouquet of flowers (also known as the ‘rei-bouquet’) in his left hand and a girl in his other. Like a zigzagging chain of people, the Cramignon winds through the village. In some villages, the order is reversed, and a girl (called a ‘rei-maid’) goes first, followed by the captain of the jonkheid. In general, the jonkheid refers to the unmarried boys (in some cases also girls) of the village, aged 16 and over. In principle, all unmarried and/or non-cohabitants are members of the jonkheid and pay their membership fee at the annual Bronk.

The dance is almost the similar in all villages. The Cramignon manifests itself on the Monday and Tuesday of the annual Bronk Feast, the multi-day celebration that follows the Sacrament Procession. When the Bronk ‘sets out’, the procession passes through the village and when ‘bronking’ takes place, this refers to the traditional festivities on the day of or days after the procession.

The Cramignon is organised by the boards of the various jonkheids, assisted by the other members of the jonkheid.

The various boards of the music associations are also involved in the organisation. The hotel, restaurant and café owners open their businesses for the Cramignon, as do several residents who open their gardens. They do not play music but wait for the Cramignon. The resting places are traditionally the large old square farms where the Cramignon stops for a while, people have a drink, and where waltzes and other festive songs are played and danced. Afterwards, the row of dancers moves on.

From 1800 onwards, the Cramignon developed in its own way on both sides of the national border, in Wallonia and South Limburg. Although the elitist-like societies of Liège tried to revive the Cramignon by emphasising its folk character, at the end of the 19th century and the beginning of the 20th century, the Cramignon became less and less popular with young people. The young people preferred to dance to the modern waltz and gallop.

Around 1900, it was the parish priests in the countryside who gave the Cramignon a boost to discourage the 'depraved' more intimate dances. As a result, the Cramignon survived in the conservative villages and disappeared in the more progressive cities such as Liège and Maastricht. The origins of folk music cannot always be traced because the music was passed on by ear and often not written down. By means of texts sung by the participants of the Cramignon, such as 'ao sjoen Nètteke' and 'd'n Os' or 'Sjtukske sjeenk', the melodies were passed on from generation to generation. It may happen that in one village the same melody is played, but a different text is sung than in another village.

Until about 1940 the Sacrament Procession (and thus the Bronk) was held on the second Sunday after Easter in all villages. This is still the case in many villages, but because the feast used to be on the same days in all the villages, people started to shift the dates for commercial reasons.

Added to network since: April 2019 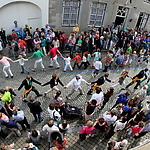 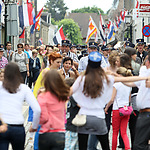 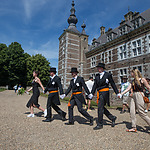 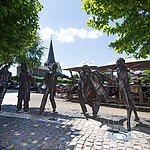 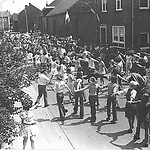 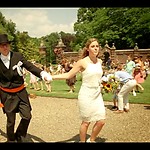 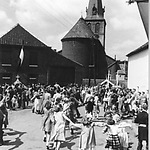 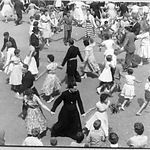 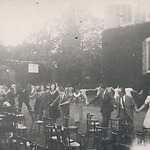 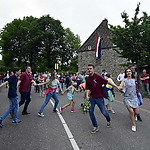