On May 10, 1940, at dawn, the German armies invaded the Netherlands, without a prior declaration of war. After the capitulation, the then pastor W. Binck already organized a memorial service for the five Alphense soldiers who fell in 1940 as a result of the German invasion. This commemoration would be the start of an annual tradition.
Starting in 2009, a foundation is responsible for the annual commemoration: Stichting Dodenherdenking Alphen.
The aim of the foundation is to strive for the continued honor and worthy commemoration of the  fallen Alphense resident as a result of acts of warafter 10 May 1940, both soldiers and civilians, as well as the Polish liberators who fell in 1944 and the members of the resistance who were executed on 8 October 1944. The foundation tries to achieve this goal by:

Practitioners and stakeholders are Foundation for the Remembrance of the Alphen and residents, relatives.

After the capitulation following the invasion in 1940, the then pastor W. Binck already organized a memorial service for the five Alphense soldiers who fell in 1940 as a result of the German invasion. These were:

Starting in 1945, the member of the resistance Adrianus Anthonius Oomen, who was shot on October 6, 1944, is also commemorated. His body was also buried at the cemetery.
Only in 2014 were the two other executed people commemorated, namely Willy van den Corput and Felix Roelen. The latter managed to crawl from under the ground, badly wounded, and survived the execution in a miraculous way. He died in Alphen in 1984.
During the liberation of Alphen by the 1 e Polish Armored Division several Polish soldiers were killed in and around the village, of which 18 are buried in the RC cemetery in Alphen and are commemorated annually.

In 1950 a local branch of the "Dutch Federation of Former Soldiers" was founded in Alphen. This formalizes the participation of the Alphense former soldiers in the annual commemoration. After all, one of the objectives of the Association is "to strive for permanent honoring and commemorating the fallen with dignity". In 1986 the name of the union changed to "Bond van Wapenbroeders". The foundation will be established in 2009 due to the aging of the members of the union. 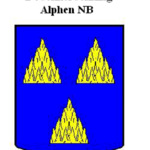