Krulbollen is a traditional popular sport that is very alive in Zeeuws-Vlaanderen. The game adds up to rolling a flat disc, in the shape of a cheese, the krulbol (curve boll), over a distance of  23 feet, as close as possible to a stick that has been placed in the ground, the staak. Because of the one-sided rounding of the krulbol it takes an oblong orbit when thrown. The sport owes its name to this phenomenon: krul means curve. Two teams of one to four people play against each other. The game is played on a sand course of 37 feet long and 11 feet wide, with two sticks, placed 23 feet apart.

There are various throwing techniques, like bollen (bolling): rolling the krulbol as close as possible to the stick and schieten (shooting): to make room for your teammate if the opponent is too close to the stick. In Dutch Flanders different competitions are played. By putting down the history, organising tournaments and promoting krulbollen with young people, the clubs try to keep krulbollen alive.

In Zeeuws-Vlaanderen five of the local krulbolclubs are united in the Nederlandse Krulbol Federatie (Dutch Federation of Curve Bollers), established in 2012 in IJzendijke. The objective of the NKF is to take care that the popularity that krulbollen is enjoying at the moment, will be permanent. In the NKF clubs from Sas van Gent, Oostburg, Aardenburg, Breskens and IJzendijke are represented. There are contacts with clubs in some other places.

Ball games presumably spread from Asia to southern Europe and from there to eastern and northern Europe. Skittles formed a separate group within the ball games. Balls are not used in krulbollen, but it is presumed that the game is a late variety of the game of skittles with balls. In 1300 the game was initially played by the nobility in Switzerland, Austria and Germany. In the sixteenth and seventeenth century krulbollen became more like a popular sport.  Around the middle of the seventeenth century the game was in any case played in Antwerp and surroundings. In the nineteenth century the game was popular in Zeeuws-Vlaanderen. In 1866 IJzendijke already owed a flourishing ‘Society of the Krulbol, the United Friends’. In that year and the year after there certainly were big krulbol tournaments in IJzendijke with participants from Hoofdplaat, Oostburg and Biervliet. The reports clearly show that the tournaments were characterised by fraternisation with Flemish communities. Since the end of the nineteenth century the rules for krulbollen have not changed significantly. Until 1940 the krulbol consisted mainly of walnut or beech wood. In recent decades the krulbol is made from phenol resin, pressed with cotton fibre. Since the sixties of the last century the emphasis is more on the social element in the game. Thus, for awarding the prizes, more value is given to fair sharing than to who is the best. 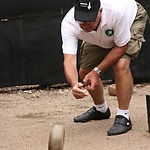 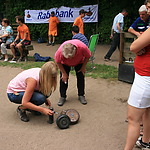