The name of the tradition kopro beki derives from the name of the copper bowl (in the shape of a bucket) that is used. The tradition consists of making and decorating the bowls, singing, dancing, sketches and the knowledge of the symbolism and the significance of all these elements. The ‘kopro beki’ itself is a holy object, that may not stand on the floor and is decorated with starched headscarfs and presents. This can be anything that is related to the receiver (sugar, soft drinks, beer, champagne, chocolate, a plant). At different occasions the headscarfs will be made of different fabrics or have different colours, each of which has its own significance. During the tyari boskopu (bringing the message) the kopro beki is worn on the head. The reception of the group at a tyari always happens with fanfare (music), after which people dance and sing. The public is given spoken odo’s, life wisdoms in the form of a short wish or a saying in Surinamese, which are translated for a Dutch audience. Sketches are performed too, on the basis of the biography of the receiver of the message (consisting of presents). In the sketches all kinds of traditional attributes are used: wooden paddles, a pickaxe, a machete, a washboard and a tub. Kopro beki can also have a function within winti, the traditional Afro-Surinamese religion. A winti (name for all supernatural beings) can communicate to someone in a dream that he has to make a kopro beki. Sometimes the winti also says what should be put into the beki. The kopro beki is still developing. For example, a kopro beki has been recently made with checkered cloths (pagni) that tell the story of the run-away slaves. The pagni namely made clear where the run-away slave came from, because all owners used different cloths.

The ten members of the group Kopro Beki Prodo, all of them women, are the practitioners in the Netherlands. During demonstrations, workshops, lectures and performances at schools, at Keti Koti (commemoration of the abolishment of slavery) or on holidays, they propagate their tradition. There are still some ladies of old age in Suriname who know kopro beki. The performances are not only given in the own circle but also for interested groups of Moroccans, Turks, Antilleans or Africans in the Netherlands.

Boasting one’s wealth was something that the ones who had been made slaves saw from their misi (mistress) and which they adopted wherever possible. Copper objects often replaced the expensive crystal or the expensive porcelain. Already during slavery a baskiet (basket) with boskopu (presents) was taken to someone who had something to celebrate or to commemorate. It could be, for instance, packages of flour, sugar, coffee, a croton branch (a plant) or sometimes a pagni (loincloth). After the abolishment of slavery the basket was replaced by a wooden plateau and after that by a kopro beki. This is decorated with headscarfs in various binding methods, and still filled with presents. The tradition of the kopro beki with presents and the one of the du-companies (theatre groups with a number of fixed characters, who sing about people or situations within the colony, or mock them) have been blended into tyari boskopu. That is ‘bringing the presents’ to someone who celebrates or commemorates something and for whom people dance for and about whom sketches are played. The centre of a tyari is nearly always formed by women, according to the nineteenth century tradition of the du-companies that were financed by misi’s. 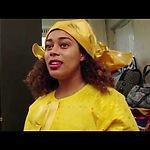