Kaaibakken is a throwing game where a goal must be hit over a relatively short distance. There are pennies on the 'kaai' (an upright brick or a block of wood). Whoever overthrows the kaai looks at how the pennies (head or coin) lie on the ground: the head is got, the coin is put back. Via a number of complicated rules, whereby one can 'kill' the other players, one player finally becomes the winner of the pot (six participants for six cents).

The participants come from all over environment or elsewhere from the Netherlands to participate in the annual championship. For a long time there was an exchange with the Wadden island of Norderney. Then we had the international championships. The championship is organized every year under the auspices of the Veenkoloniaal (Peat Districts) Museum in Veendam. We also have contacts with, for example, Drenthe clubs.

The game used to be played a lot on the ice in the Peat Districts. They played with groups of 5 or 6 men for money. The rules of the game were not written down until the first championship in 1986 and differed from place to place. In other areas the game is known by other names: In Drente they call the game BLOKGOOIEN and in Friesland PIKSJITTEN.

In the crisis time a 'happy' day laborer came home and said to his wife: "I have won a stoetje (a sandwich)". 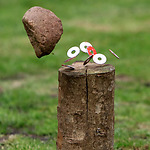 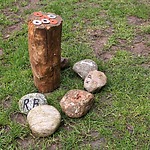 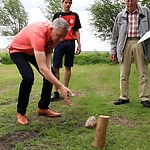 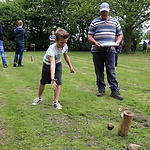 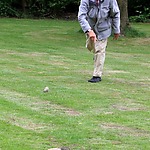