A Gouda clay pipe is made of a special clay, packed as ‘rolls’ of 22 lbs, by a pipe-maker. The amount of clay, needed for one pipe, is rolled into a ball and then made into a funnel model. The clay is put in a mould and the smoking channel is formed with a pin. The complete press mould goes into a bench vice. To shape the bowl, for the tobacco, a stopper (a conical metal shape) is pressed in a notch of the press mould and the connection is made between the smoking channel and the bowl. The clay shape is lifted from the mould, the seams are trimmed and a mark is affixed. When dry, the pipe is baked in an oven at about 1040 degrees Celsius. Good moulds are important, the clay must have the right composition and the pipe-maker must master the technique of rolling the clay. The appearance of the Gouda clay pipe depends on the mould used.

The Stichting De Goudse Pijp (The Gouda Pipe Foundation) – led by Patrick Vermeulen – has as its goal the bring the history of the Gouda clay pipe to the attention of the public and give a new life to the craft. The Foundation has contacts with museums and schools, gives lectures, organises other activities and wants to organise pipe-making courses. Next to this there is one other pipe-maker active in Gouda, Dick van Maanen. The St. George Guild in Gouda organises an annual activity to keep the Gouda pipes burning, in the literal sense. The company De Drietand in Gouda always makes the oven available for the final baking of the pipes.

In 1606 English mercenaries in Dutch military service came to strengthen the defences of Gouda.They taught the people in Gouda pipe-making on a small scale. A stonemason, William Baernelts, introduced the pipe-making craft in 1617. The pipes that were made after 1620 began to get a distinct character: a bulgy bowl, a beautiful finish and a kind of stripe pattern decoration. In 1660 a guild was formed for the Gouda pipe-makers, which had 180 members after five years. In 1666 the first Gouda pipe-fair was held. In 1749 there were 349 workshops in Gouda where pipes were made. The shape of the pipe changed gradually, the wall of the bowl and the stem of the clay pipe became thinner because of a better quality and an enhanced manufacturing method and the pipe head became larger. More tobacco was used in the course of time, because it became cheaper. The stems were longer, so that the smoke came less hot in the mouth, making smoking more enjoyable. In the nineteenth century the pipe got considerable competition from the cigar. In 1853 only 13 companies were left where the Gouda pipe was made and by the end of that century the Gouda pipe had almost vanished. Wooden pipes appeared to smoke better and were not as vulnerable. The popularity of the cigarette made pipe-smoking go out of fashion even further.

Added to inventory since: May 2014 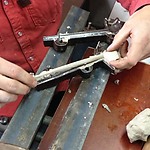