Fierljeppen (far leaping, originally: elegant jumping) is a traditional sport in which an athlete tries to bridge the largest possible distance over a ditch/water by means of a long vaulting pole. A leap begins with a short, fierce sprint to the pole, followed by a jump into and a climb to the top of the pole, to ultimately land in a sand bed with a jump off.

The farther the pole is placed, the more speed will be needed for the sprint and the greater the possible distance to be covered. The right distance to place the pole and a good run-up can make the pole slowly pass the dead centre. That is important to gain more time for climbing. A good jump off from the pole may considerably enlarge the jumping distance. At landing the rear print in the sand determines the outcome.

Jumping across ditches developed into a sport that imposes requirements on the accommodation and the leaper. The ditch became a ramp, water and a landing  site. The leaping evolved through organised competition, the training level in climbing raised and the poles became longer. The height of the ramps, depth of the water and length of the poles meet competition regulations and safety requirements.

There are matches for Youth, 1st and 2nd class (In Friesland 3rd class also). The best leaps per match add up to a ranking, which determines if you are promoted or degraded. On that basis it is decided who will be allowed to join special matches. The special matches are the Regional Championship, the duel, the national competition and the Dutch Championship.

The Nederlandse Fierljepbond NFB (Dutch Fierljep League) has two members: The Frysk Ljeppers Boun (FLB) and the Polsstokbond Holland (PBH). Both members represent a number of departments. Together they represent a group of approximately 600 active fierljeppers in the Netherlands. Furthermore there are, of course, people who come to watch matches, demonstrations and who take part in clinics.

The author of the famous book ‘Toen en Nu’ (Then and Now) tells the story of Willem van der Meij: the man who slipped through the Spanish lines towards Alkmaar with a message, hidden in the hollow of his vaulting pole, in 1575. The pole was a well-known utensil at the time for people who went into the fields – indispensable in the watery landscape. The cradle of far leaping with a pole in competition is the province of Friesland. There leaping matches were held in the beginning of the twenties already. From a group of Frisian bird protection watches the decision came to start organising matches for fierljepping and for this purpose the Frysk Ljeppers Boun was established in 1960. In the same year the Polsstok Bond Holland (PBH) was founded.

With the increasing length of the poles and the resulting larger leaping distances, adequately adjusted landing sites became more and more necessary. Whereas people used to land on the shore, it is now an (ever thicker) layer of sand. In the beginning the leaping was done from the shore over a ditch. For the competition ever higher and longer ramps were made to leap from. The water was made deeper in order to ensure a safe catch after a fall from a higher vaulting pole. For reasons of safety standards for ramp and water depth have been introduced in the meantime.

Added to inventory since: January 2018 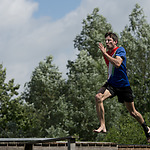 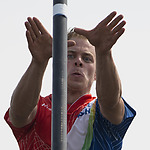 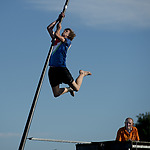 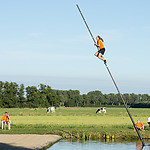 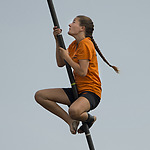 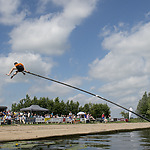 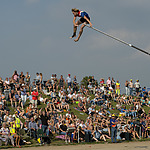 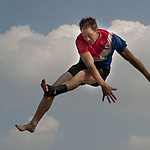