Every seven years the village of Beesel in Limburg performs the Dragon stabbing drama, a stunning theatre play in which virtually the whole village participates. The play is based on the legend of Saint George and the dragon. In the old story George saves the king’s daughter from the monster. Every performance of the stabbing of the dragon slightly differs from the previous ones, to keep things interesting for the audience as well as the actors. No fewer than 500 actors all live in Beesel, or were born there. The inhabitants also build the decor, the attributes and the 46 feet long, fire-breathing dragon with their own hands. Every house is decorated with dragon flags. The play is performed six times, for 2500 people each. In recent years new events have been added: Children’s Dragon stabbing for the children of Beesel. They build their own mini-dragon. The historic parade, a rather recent addition, attracts as many as 30,000 visitors. The ‘Night of the Dragon’, the final feast, is also in dragon-style.

The Dragon stabbing in Beesel is specifically called a tradition of the whole Beesel community. The board of the Stichting Draaksteken Beesel (Dragon Stabbing Beesel Foundation), established in 1981, is responsible for the organisation. The Society of the Dragon, a club of local entrepreneurs, is involved in the promotion.

The dragon stabbing play is based on a legend of Georgius of Cappadocia, who lived in the third and the fourth century and fought the evil: the dragon. In the town of Silena the inhabitants were forced to daily feed sheep to the bloodthirsty dragon, to satisfy its hunger. When all the sheep had been eaten, children were sacrificed. One day it was the princess’ turn, which made George fight the dragon. He promised to kill the monster if every inhabitant would convert to Christianity.

In the seventeenth century a civic militia was established under the patronage of Saint George. This militia/guild would stab the dragon as part of the procession, every year. The oldest written statement of the play in Beesel, however, dates from much later, 1736. Until the French period (1797-1813) the Dragon stabbing was a yearly event.  After the militia of Saint George had merged with the militia of Saint Sebastian, into the Militia Brotherhood / Guild Saint George and Saint Sebastian, around 1864, the play was extended and more spoken roles were introduced. In 1883 for the first time Dragon stabbing was performed in three acts: the taming of the dragon at the river Maas, the victory march through the village, the stabbing at the marketplace. In 1935 an Execution Committee Dragon Stabbing was founded within the militia, with the task to organise a play in every seventh year. The participants in the play were no longer obliged to be a member of the militia. Since 1967 Dragon stabbing is performed in one, fixed place: Nieuwenbroek Castle. The play is now part of the three-day Dragon feasts and became increasingly extensive, the performances greater. The storyline is adapted regularly, since 1980. 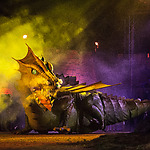 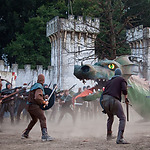 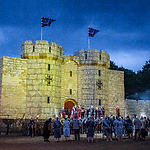 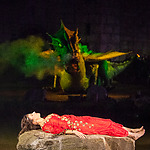 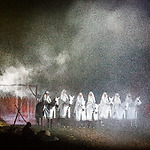 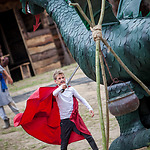