The Flower Parade is a procession of fourteen large, dahlia-decorated floats, passing through the streets of Valkenswaard on the second Sunday of September. The floats have been designed around a theme that changes every year. The parade is graced by brass bands, fanfares and street theatre groups. In addition, there are various kinds of entertainment for young and old, to ensure it to be a real day out. The parade year starts on the first Saturday of November, when the theme of the year is revealed to the designers. On Ascension Day the inhabitants of Valkenswaard get to see the scale models.  The floats are built in construction tents, which are put up exactly one hundred days before the parade. At 2 PM the parade departs from the market and goes through streets of Valkenswaard twice. Activities connected with the theme take place during the whole day. When the parade is over, the Dahlia After Party starts, to cosily chat and celebrate together. On Monday it is ‘Zwaantjesdag’ (Swans Day), the float builders’ party. The float builders are also responsible for taking down the floats.

The Valkenswaard Flower Parade is organised by the Stichting Bloemencorso Valkenswaard (Valkenswaard Flower Parade Foundation). The floats are built by members of fourteen hamlets. Building together strengthens the social cohesion and it binds people. To keep the interest of young people alive, many schools visit the tents of the hamlets during the construction period and there are special teaching programmes on the parade. On average some 30,000 people come to watch the dahlia parade.

The Valkenswaard Flower Parade was formed in September 1944, to celebrate the liberation of Valkenswaard. Children rode on bikes with flower decorations through the streets. As of 1953 it became a real flower parade with decorated floats, though small and uniform. During the sixties the parade hamlets arose. The parade professionalised and grew. Showbands started to participate in the parade and a foundation was established that took care of dahlia cultivation on an especially designated field. In comparison: during the sixties 150,000 dahlias were used in the whole parade; nowadays the same number is stuck on one small float. Today, almost three million flowers are used in the total parade. The floats not only became larger, but also more complicated, with more and more moving parts. In 1994 it was decided to give an annual theme to the parade, which had to be depicted in the floats. Moreover, theatre and figuration on and around the floats became ever more important. The side programming, like the fair and the performances, is marked by the same theme. 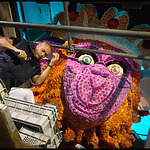 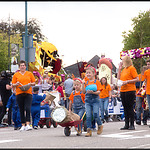 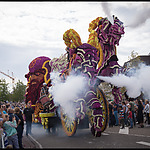 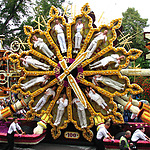 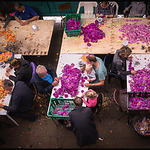 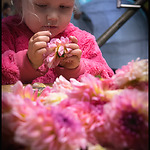 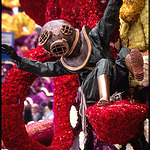