Every year, on the third Friday of August, thirteen or fourteen floats pass through the streets of Sint Jansklooster. On that day tens of thousands of people come to see and experience the spectacle. The floats do not only carry dahlia creations, but also theatre spectacles. The parade is part of a festival week that begins on Wednesday afternoon with a children’s afternoon in a party tent. On Thursday a Youth Parade passes the same route in the evening as the big parade does the day after . On Saturday there is a Parade Festival. A shooter’s party is held at the end of the afternoon and in the evening a float builders party. At this occasion the prizes for the most beautiful floats are awarded. The festival week ends on Sunday night with an ecumenical church service in the tent. Prior to the parade a model or a detailed drawing has been made. The construction of the float begins on a farmer’s yard or in an empty shed. Rebar is used for the construction. The creation is finished off with papier mâché or other material. Consequently the float is often moved to a location where it is ‘glued off’. Hundreds of volunteers work hard to put the dahlias in place.

The Christelijke Oranjevereniging Sint Jansklooster (Christian Orange Society Sint Jansklooster) organises the parade each year as well as all kinds of side-activities. Lots of people from Sint Jansklooster, with one thousand inhabitants, engage themselves in the parade. Almost the whole village is involved. Young and old are also active for the Youth Parade. Every group needs sponsors. Some inhabitants offer money and others building materials.

Like in many places, before World War II, a village feast was given for the birthday of Queen Wilhelmina on August 30th in Sint Jansklooster as well. Part of this was an allegorical parade with wagons and costumed people. 1968 was a turning point: from Lichtenvoorde the idea of a flower parade came by. The floats were initially decorated with gladiolas and other flowers. In 1980 steel constructions were used for the first time, making the floats larger and enabling more complicated designs. As of 1987 the constructions of the floats were solid enough – with truck and bus chassis – that they could drive by themselves. More and more attention was paid to the design of the float. Next to this, the theatre play and the use of figuration on the floats started to play a more important role. By deploying theatre play, sound and music, movement, smoke and other artistic interventions, the float designs became even livelier. As of 2000 the Sint Jansklooster Parade presents itself as a theatre parade. The floats became bigger and bigger, causing the route around Sint Jansklooster and wide surrounding to be considerably shortened for safety reasons. Large groups performing theatre pieces, choreographies and musicals are seen on the floats in the past years. Complete scenarios are written for this nowadays.

Added to inventory since: June 2014 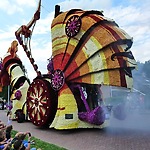