The cheese carriers at the cheesemarket in Alkmaar, are well-known throughout the world. Their coloured straw hats, white clothes and the wooden berries (barrows); everyone knows this picture. There are more traditions. The boss of the guild is the kaasvader (cheese father), to be recognised from his orange hat and cane with silver mountings. All the cheese carriers have a straw hat in the colour of the four forwarding companies, each of which led by a foreman, the overman. The company colours are red, yellow, green and blue. The eldest cheese carrier in years of service has a leather purse and is called the tasman (purse man). At weighing he puts the weights on the balance and in the past he cashed the weigh money. The guild board appoints a provost, ‘de beul’, (‘the executioner’). He writes the names of cheese carriers who are late on the shaming board and cashes the associated fines. The board also appoints a knecht (servant), responsible for all odd jobs and for cleaning. Cheese carriers wear white clothes, a coloured straw hat and black shoes. They all have nicknames. If a cheese rolls from the berry during walking, the first cheese carrier of another company who sees that, loudly shouts: ‘OWL’, the only insult allowed. If the kaasvader should forget his hat or stick, the cheese carriers shout: ‘Father, father, you walk naked!’ The money from the fines that the late-comers must pay, partly goes to a good cause. The remainder is saved for Kruimelavond (Crumbs evening) on the Friday before Christmas, when the men gather for their ‘reward’. That consists of ‘wages’, two almond cakes for the wife, to thank her for keeping the clothes white and a white loaf of bread with butter and a thick slice of cheese for the children.

One is cheese carrier until death, but from 67 years on they are not expected to actively carry cheese anymore. The attachment to the guild remains very strong. The zetters and ingooiers are strongly involved with the cheese carriers’ guild, even if they are not members. Zetters set up the market and load the cheese on the berries. Ingooiers load the cheese, after weighing, to handcarts and take them to the lorries. The current cheese carriers are volunteers, who do their work against a small contribution to the lost income. 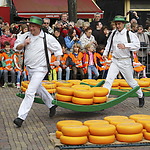 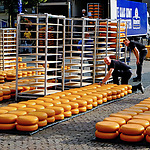 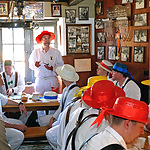 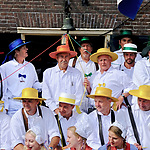 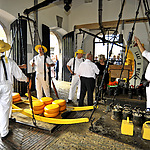 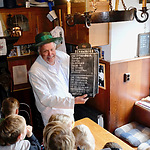 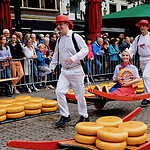 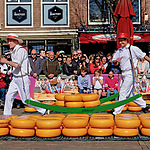