In Grou the traditional Dutch Saint Nicolas feast is not celebrated; in this village, people celebrate Sint Piter (Saint Peter) on February 21. For outsiders it looks like Saint Nicolas, but Sint Piter is not of the same origin. On the Saturday before February 21, Sint Piter arrives in Grou by boat. He wears a white cloak and rides a (black) Frisian horse. Sint Piter is received by the mayor and sung to. Subsequently Sint Piter passes through the village in a parade, with the mayor, representatives of committees and school children. Sint Piter visits schools in Grou, the nursery, the care centre, an welcome party for children, an informal reception for the residents of Grou and former inhabitants and sick children. As of 1951 a Sint Piter fairytale has been performed each year. The fairytale is one of the cornerstones of the current celebration and is done in Frisian. Sint Piter songs in the Frisian language are another element of the feast. Since 2021, Sint Peter is accompanied by his companion 'Aldemar'.

Aldemar is a 'creature of nature' who lives in a treehouse with his parents down in the National Parc Alde Feanen near Grou. He wears a half-high hat with welding goggles. On his back he carries a basket which contains 'pipernuts', presents and his iPad.

Several weeks before the arrival of Sint Piter the Sint Piterfrouljuskomitee  (Sint Piter women committee) organises a Sint Piter fair. This marks the beginning of the activities of the local entrepreneurs. The revenues, which are always considerable, are used for the performance of the fairytale, publishing books and for Sint Piter games for the children.

During the fair Aldemar is present to take in shoes and boots from small children. These shoes and boots, filled with a present, can be searched for later on in the window of one of the shops in Grou.

On February 21, by the end of the afternoon, Sint Piter and Aldemar are said goodbye in the centre of the village.

Several thousands of residents and former inhabitants of Grou are present at the entry of Sint Piter.

The Sint Piterkomitee Grou consults with the Breed Komitee (broad committee), in the presence of, among others, the schools, the preschool, various associations, the two leading actors and the horseman. Besides there is the Sint Piterfrouljuskomitee, solely consisting of women, and the business club Grou.

The Mearkeploech (fairytale team) is responsible for the fairytale. Each year between ten and twenty players take part and some 20 people are active behind the scenes: make-up artists, technicians, set builders, costume seamstresses etc.

The feast of Sint Piter is a celebration of spring. This feast used to be celebrated far and wide, and fertility rituals and bonfires were a part of it. As time passed, however, the feast dissapeared almost everywhere, but not in Grou where it was reinvented.

In 1903 kindergarten teacher Riek Jansen re-introduced the feast at school and Sint Piter appeared in public as a white Saint Nicolas with a red miter and only one Swarte Pyt. After World War II the feast evolved further. The Sint Piterfrouljuskomitee was established. These women started to sell handicraft and presents at a fair, to cover the costs of the theatre play. After the teachers had performed a fairytale for their pupils for the first time in 1951, both initiatives were combined. During the seventies, the fair became an activity of all the women societies in Grou. As of 1973 Sint Piter arrives on the Saturday before his name day (February 21, according to the Roman-Catholic  calendar). Since 1990 a Sint Piter welcome party for adults is held directly after the arrival.

In 2016 there were demonstrations at the entry of Sint Piter, by the action group ‘Kick out Zwarte Piet’. The organising committee discussed this issue intensively afterwards, with the inhabitants of Grou as well as the municipality of Leeuwarden. In 2021 this resulted in a new companion for Sint Piter: Aldemar. 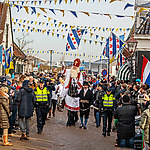 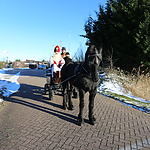 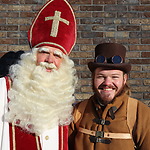 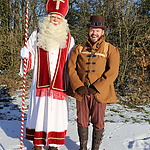 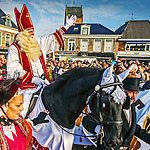 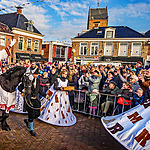 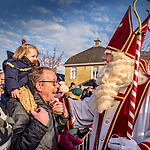 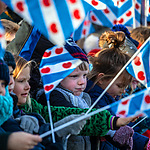