The Rijnsburg Flower Parade runs every year on the 2nd Saturday in August and is composed of 12 floats, music cars, flower-decorated passenger cars and music corps. In addition, the themes on the floats are supported and represented by more than 100 extras. Every year this special flower parade attracts more than 350,000 visitors. This event is also successfully broadcast annually on national TV (broadcaster MAX). Flower Parade Rijnsburg distinguishes itself from other corsos by the use of hundreds of types of flowers that are processed by professional arrangers. The first flower parade in Rijnsburg took place in 1946. This makes the parade one of the oldest in the Netherlands.

Added to network since: January 2020 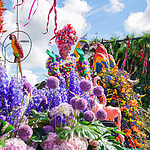