Saint Sebastian is a shooters brotherhood, but an ecclesiastical brotherhood in the first place. The members do not take part in shooting competitions nor in the Old Limburgian Shooters’ Festival. An important activity of Saint Sebastian is to participate in the annual City Procession of Kerkrade, when the Holy Sacrament is carried through the streets. The priest walks under a baldachin with the monstrance that visibly holds the Holy Host, the Holy Sacrament. The City Procession ends with a Eucharist celebration in the open air, where the King of the brotherhood, flanked by both shooter masters, sits next to the altar. After the Holy Mass, in the afternoon, the members of the brotherhood hold their annual King’s bird shooting competition. The King acts as chairman of the brotherhood. On Patron’s Day, January 20th or the first Sunday after, the King adds a shield to the silver bird that is connected by a chain to already more than two hundred shields. The King wears the silver treasure at official occasions.

The Shooters Brotherhood St. Sebastian was established in Kerkrade in 1617, by Governess Isabella Clara Eugenia of Austria, in her capacity as governess of the duchy of Brabant. At the time processions by Catholics were disturbed by Protestants. In the statutes of that year it was explicitly mentioned that the shooters had the task to protect the carrying of the Holy Sacrament. The oldest silver shield that is still hanging on the silver bird, dates from 1617. The Legezbuch, the oldest record of the shooters brotherhood, covers the period 1794-1922. Until 1925 the men shot with a rifle at the King’s shooting, afterwards a cross bow was used. The King’s shooting is after the Holy Mass that is read after the City Procession. Initially Patron’s Day was celebrated on the Name Day of Saint Sebastian, January 20th. As of 1969 the day has always been celebrated on a Sunday, on or shortly after that date. The King’s silver is a rich treasure for the brotherhood. In 1981 it was decided to only leave the King’s shields on the silver bird’s chain and exhibit the other shields in a glass cabinet in the church of Kerkrade. Many people were shocked when by the end of May 2013 it appeared that the 22 lbs heavy King’s silver was accidently given to the garbage collector. By a coincidence the silver was found by the police at a house search in February 2014. The brotherhood now cherishes the treasure even more than before.

Added to inventory since: September 2015 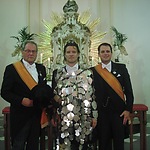 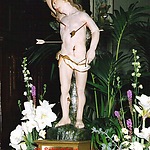 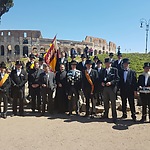 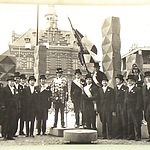 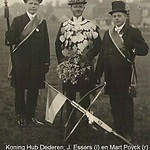 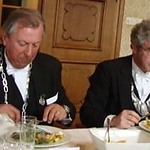 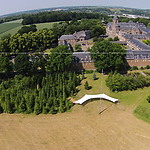